British car production declined -14.4% in March, falling for the 10th month in a row with 126,195 units rolling off factory lines, according to figures released today by the Society of Motor Manufacturers and Traders (SMMT). Production for both home and overseas markets declined in double digits, down -18.1% and -13.4% respectively.

Continuing recent trends, soft demand in key Asian and European markets was a significant factor, coupled with model changes and shifting car segment preferences globally. Although UK exports fell in March, they increased their share of overall production year-on-year to 78.7%, demonstrating the crucial importance of free and frictionless trade. 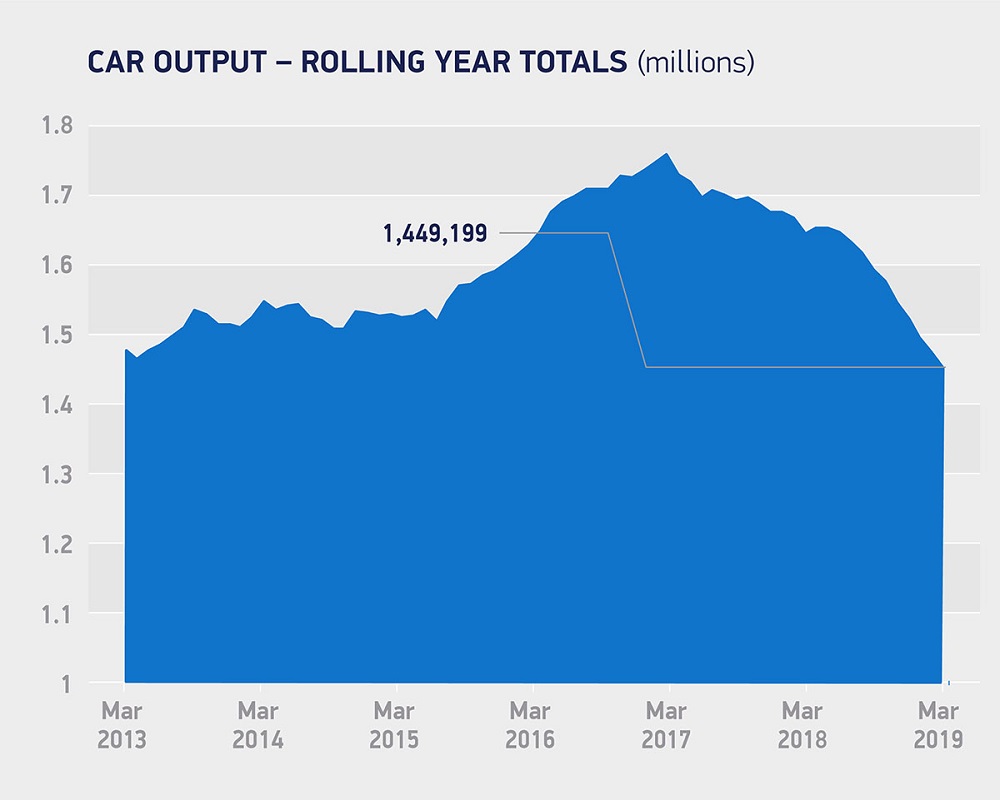 The latest independent production forecast is also published this week illustrating what’s at stake for British car manufacturing following Brexit. Assuming a positive result to the negotiations with a favourable deal and transition period maintaining the status quo, UK car production could be 1.36 million units in 2019, down from 1.52 million in 2018, before rising to 1.42 million by 2021.

However, should Britain crash out of the EU and fall back on WTO rules for a sustained period, output is forecast to fall around 30% on recent levels to just 1.07 million units by 2021, a level consistent with the dark days of the mid-1980s.

Mike Hawes, SMMT Chief Executive, said, “Despite the extension, the Brexit clock is still ticking and a devastating ‘no deal’ remains a threat. This new period of limbo does not end the havoc for industry, with investment stopped and expensive factory shutdowns moved to avoid a Brexit deadline that has itself now moved. Just a few years ago, industry was on track to produce two million cars by 2020 – a target now impossible with Britain’s reputation as stable and attractive business environment undermined. All parties must find a compromise urgently so we can set about repairing the damage and diverting energy and investment to the technological challenges that will define the future of the global industry.”