Will.I.Am and Lexus create a laser and sound spectacular 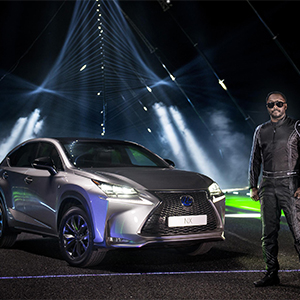 Music, art and technology have been brought together in will.i.am’s spectacular remix of his hit track #thatPOWER for Lexus’s Amazing in Motion campaign. The unique interpretation was created live by the musician and global entrepreneur, using hundreds of motion and sound-sensitive lights and lasers and three Lexus NX crossovers, piloted by a team of top stunt drivers.

Captured in a video released today, will.i.am takes on the role of the frontman, battling against speed and rhythm to conduct and navigate the Lexus NX by hitting a sequence of laser targets.

The unprecedented event was shot in the course of one night last week on a disused airstrip in Spain. The stunt team included Niki Faulkner, whose movie credits include the James Hunt driving sequences in Rush, the 2013 feature about the battle for the 1976 Formula 1 championship.

Commenting on the finished video, will.i.am said: “Working with the stunt guys to hit the laser targets in time with the music wasn’t easy to get right but the result was awesome. The combination of technology, design and music in this project was out of this world.”

The lighting and laser rig was created by Marshmallow Laser Feast (MLF), famous for its work with the world’s leading bands, including U2 and Coldplay, and took a team of 65 technicians more than week to install.

Barnaby Steel, MLF’s Creative Director, explained how the concept worked: “Together with Lexus, we’ve created a huge musical game with three stunt drivers as the players and will.i.am as the conductor.

“Music is brought to life when the cars hit beams of light that are motion sensitive at the correct time and rhythm. It’s basically like a giant laser harp with cars instead of fingers. The challenge for will.i.am and the drivers was to navigate the light points on tempo. When they fell off beat and triggered notes off tempo, the system had to restart.”

Alain Uyttenhoven, Head of Lexus Europe, said: “We’re projecting that the NX will represent one third of all Lexus sales across Europe this year, so it feels right that we’ve created something as bold as this event with will.i.am – something that truly embodies our brand philosophy of Amazing in Motion.”

The Lexus NX, introduced last autumn, marks Lexus’s entry into the mid-size premium crossover market. The range includes both the full hybrid NX 300h and the NX 200t, powered by Lexus’s new 2.0-litre turbocharged petrol engine. The NX has quickly become established as one of Lexus’s fastest-selling models in the UK and Europe.