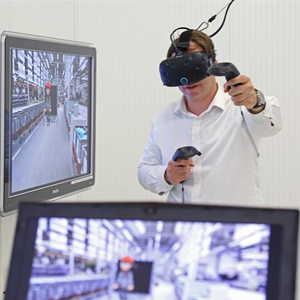 Diving into the deceptively real world of virtual reality (VR), for  example exchanging ideas with Group colleagues at a logistics hall in the Czech Republic from Wolfsburg – the latest VR technology makes that possible for the first time.

Experts from the Volkswagen Group have developed virtual reality applications for production & logistics that enable several participants to meet in a VR room. Following a test phase, the Volkswagen Group is now the first car manufacturer to roll out VR technology with the HTC VIVE-VR  system.

The Volkswagen Digital Reality Hub developed for this purpose together with the Innoactive startup bundles all existing VR applications, users and tools in the Group on a single platform. This platform is making its public debut at the Digility conference and exhibition in Cologne.

“Virtual reality creates the ideal conditions for cross-brand and cross-site collaboration”,  Jasmin Müller from Audi Brand Logistics explains. Together with colleagues from the Group, she develops VR solutions for production & logistics as part of the cross-brand Digital Realities Team. They have already designed virtual reality logistics trainings, created virtual environments for workshops, or exchanged best practice examples in VR.

Dennis Abmeier from Group IT is also a member of the Digital Realities Team. As he explains, “exchanging knowledge is just as important as bundling knowledge. That’s why we came up with the Volkswagen Digital Reality Hub central platform in collaboration with Innoactive. All employees have access to all existing VR elements as well as existing knowledge via the platform. That way, we enable individual units to implement new use cases quickly and jointly move in VR applications so they can plan new workflows interactively.”

Mathias Synowski, a VR user from Group Logistics, describes the added value of virtual reality solutions: “Going forward, we can be virtual participants in workshops taking place at other sites or we can access virtual support from experts at another brand if we are working on an optimization. That will make our daily teamwork much easier and save a great deal of time.” Rolling out VR technologies is therefore an important step towards the digital, networked and efficient production of the future.

The testing and rollout of virtual reality applications is an example of cross-brand cooperation in the Group: under the umbrella of Group Logistics and the “Digital Factory”, the Digital Realities Team is currently developing further virtual reality applications for production & logistics at the Audi, SEAT, ŠKODA and Volkswagen brands. The applications will be accessible throughout the Group via the Volkswagen Digital Reality Hub common platform. As far as the technology is concerned, the VR end user device is the HTC VIVE Business Edition, a special VR headset developed specifically for businesses. The Volkswagen Group is therefore the first car manufacturer to roll out virtual reality (VR) technology throughout the Group with the HTC VIVE headset.

The Volkswagen Group, Innoactive and HTC VIVE are presenting the new VR applications for production & logistics as well as the Volkswagen Digital Reality Hub to the public for the first time at the Digility conference and exhibition in Cologne on July 5 and 6, 2017. There will be a live demonstration of the latest VR applications at the trade fair for AR and VR technologies.