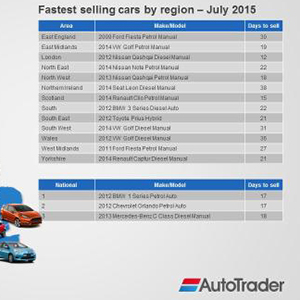 The country’s largest automotive marketplace for new and used vehicles has just published its latest tables of fastest selling cars. Auto Trader figures covering July reveal that the 2012 BMW 1 Series Petrol Auto was the quickest seller nationally, taking an average of just 17 days to turn. Overall, models in the national top ten sold in around 20 days. This was the same as in June, however their average price rose by more than £2,500.

The Vauxhall Insignia held a national top ten spot for the third month in a row. And regionally, the Nissan Qashqai continued to shine with model variants making the top ten in seven UK regions. London was a hotspot. 2012 Diesel and petrol Qashqai variants took the top two positions, turning in an average of just 12 days.

“Once again our figures show how quickly the market can change,” said Karolina Edwards-Smajda, Auto Trader Director, Retailer & Consumer Products. “Speed of sale is key and using market intelligence to complement experience can really help retailers keep one step ahead of the game – and help boost their profits.

“In June, for example, the average car turned in 52 days and last month that rose to 53. However for those using Auto Trader’s i-Control product to manage their forecourts, the average days in stock were cut in half. Last month best practice users reported an average 29 day turn for cars on their forecourts.”

Analysts at Auto Trader have also pointed to some interesting trends in the regional figures. In the South of England, for example, the top ten was dominated by BMW and Vauxhalls. The 3 Series took the first three positions, followed by the Insignia, Corsa and Zafira. Only the Passat from Volkswagen prevented a clean sweep for the German and American giants.

Meanwhile, the top ten for the East Midlands was also noteworthy in July, but for its close alignment with the SMMT ten new car sales figures. In total nine of the top ten fastest selling model variants also figured in the new car best sellers’ table.

The all-electric Renault Kangoo Z.E.33 is set to help

There’s no question that businesses in the UK are