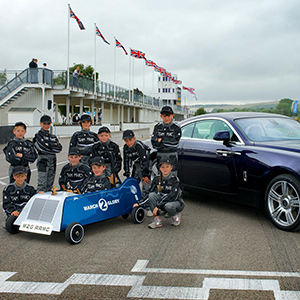 A closely-guarded partnership between Rolls-Royce Motor Cars and a team of budding racers finally broke cover on Sunday. The venerable environs of the Goodwood Motor Circuit did little to intimidate this team of maverick designers, engineers and drivers who produced a highly encouraging performance despite the wet track conditions.

The car, a specially engineered electric racer, reached speeds of 8mph as it made short work of a track that has proved the scourge of some of the most revered names in motor racing history.

From practice through to the final race, the twin-battery 24 volt power-unit and aero package worked in perfect harmony. The team, an enthusiastic group of 10 and 11 year-olds from The March Church of England Primary School, just 100 metres from the Home of Rolls-Royce on the westerly corner of the Goodwood Estate, were ecstatic with a performance that built on the strength of a highly successful debut in the 2014 Green Power IET Formula Goblin race series.

The livery, inspired by the exploits of Sir Malcolm Campbell and his land-speed record winning craft, Bluebird, was designed by the March Team in collaboration with the Bespoke designers at the Home of Rolls-Royce. A series of masterclasses, held at the school and at the Company’s head office, determined the final choice of design and also gave the children an insight into the super-luxury automotive manufacturing process.

A team of Rolls-Royce Apprentices from Assembly, Engineering, Wood, Leather and the Surface Finish Centre then set to work, turning the design vision into a sleek, exquisitely finished racer, fittingly named ‘March 2 Glory’. Maggiore Blue, the colour made famous by the Phantom Drophead Coupé Waterspeed Collection, is perfectly counterbalanced with a timeless combination of aluminium-effect bonnet and grille surround.

A hand-painted coachline with hare logo, painstakingly applied by Master Coachliner Mark Court, sits above the team’s signature ‘March 2 Glory’ insignia. The addition of a sartorially on-point white pinstripe to the tyres completes a bold and evocative design scheme.

Comfort for the driver is guaranteed through the application of the finest grade Phantom leather in Tan, finished with Bespoke blue stitching. A perforated leather backrest displays the initials of all of the team members, hand-stitched by the children, overseen by the Leathershop Apprentice team.

In a unique nod to modern-day history, a ‘March Hare’ hand-veneered mascot, takes the place of the traditional Spirit of Ecstasy figurine. A similar mascot, in the shape of a rabbit, can be seen on the Rolls-Royce four-wheeled gravity racer, originally raced at the Goodwood Festival Speed Soapbox Challenge in 2002 and now on display at the Company’s head office.

Far from an exhibition of style over racing prowess, The March School car is an engineering triumph. An aluminium space-frame, reminiscent of the state-of-the-art frame that underpins the Rolls-Royce Phantom, has been specially built to reduce weight, in turn, reducing the friction coefficient between the road and tyres. The space-frame is clad in light-weight body panels, hand-moulded using advanced techniques in the Rolls-Royce Surface Finish Centre to the shape of the frame to make the car as aerodynamic as possible. Adherence to the strict guidelines of the Green Power IET Formula Goblin race series ensured the hackles of the eagle-eyed scrutineers were not raised.

An exhaustive process of testing and refining overseen by the marque’s Apprentice team ensured linear torque delivery from the car’s twin 12V battery pack. Exceptional road-holding capability is also maximised through intelligent channeling of airflow. This is via intuitive positioning of the ‘March 2 Glory’ number plate which is mounted and recessed at an optimal angle for maximum downforce – the perfect configuration for a rear-drive racer.

Andrew Ball, Global Corporate Communications Manager, said, “We were delighted to support The March CE Primary School with their 2015 Greenpower entry. The team at Rolls-Royce were impressed with the children’s enthusiasm and passion for the project and their attention to every detail. We have no doubt that they are designers and engineers of the future, and we look forward to welcoming them one day to the Rolls-Royce family.”

Chris Hicks, Maths Teacher, The March Church of England Primary School, said, “It has been a real privilege for the children to work with the experts from Rolls-Royce and I’m sure it has inspired many to pursue future careers in engineering.”

The race was organised by the Greenpower Education Trust, a charity that aims to promote sustainable engineering and technology to young people across the UK. Since inception in 1999, GreenPower has rapidly grown and now works with 500 schools and over 8,000 students.