Peugeot Team Continue To Lock Out The Front 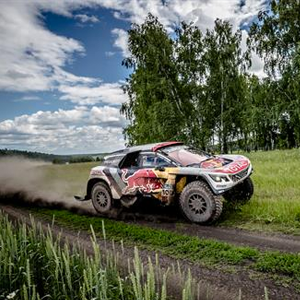 The third stage of the Silk Way Rally presented very different conditions to the two shorter stages seen before: extensive gravel tracks and short grass, with dry weather as opposed to the earlier deluges.

The stage was also much longer: 329km forming a mental and physical endurance test that lasted over 3h10m – twice more than yesterday- and was completed at very high speed of 200kph.

The scenery may be different today but the overall results are the same: three Peugeots in the top three positions, despite problems for last year’s Silk Way Rally winner Cyril Despres. Sébastien Loeb was pushing hard right from the start and quickly made time on teammate Stéphane Peterhansel, resulting in a 4m34s gap between the two drivers in the stage rankings and 3m15s gap in the overall classification. The following competitors are now almost 40m off the Peugeot ‘Dream Team’.

Just a few kilometers before halfway point of the stage, Cyril Despres made a minor navigational mistake and got trapped in a hole, where he stayed stuck for 12m. As a result, it was not a Peugeot one-two-three on the stage today, but Cyril keeps third in the overall rankings, with a comfortable 21m cushion.

Sébastien LOEB, Driver Team Peugeot Total
Winner of Silk Way Rally Stage 3 / 1st overall
“I’d say that it was a tricky day but it went well for us. We started third and caught Cyril after about 50 kilometres and Stephane after about 125 kilometres, so from then on we were first. Daniel did a really good job because the navigation was really not easy; no major mistakes. Apart from that, we didn’t have any big problems today and the Peugeot DKR Maxi was perfect as well. It’s a proper rally raid experience.”

Stéphane PETERHANSEL, Driver Team Peugeot Total
2nd of Silk Way Rally Stage 3 / 2nd overall
“It’s not so often that you get a stage like this on the Silk Way before leaving Russia; this is normally the type of stage that you see later on in the rally. Today was very nice! I liked the stage a lot but the navigation was really complicated; especially when you are first on the road, with lots of little gravel tracks running through the grass. So it’s hard to know which direction is the right one. Definitely this was the most complicated stage of the rally so far, so we are happy to get through it. And we had nice weather as well, which is a bit of a contrast to before!”

Cyril DESPRES, Pilote Team Peugeot Total
4th of Silk Way Rally Stage 3 / 3rd overall
“Not a good day for us, but it could have been much worse. We got off course then became stuck in quite a deep hole and finally lost much time. So I’m disappointed but it’s not the end of the world. We have a long way still to go and every chance of doing well.”