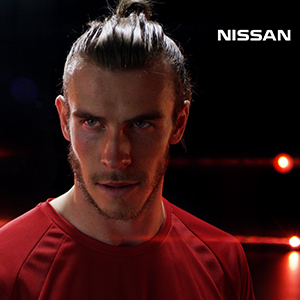 Speaking to Nissan, the official global automotive sponsor of the UEFA Champions League, the Real Madrid C.F. star reveals what gets his heart racing on match-day:

“Before any UEFA Champions League game, they’re very big and they’re very exciting, just getting ready to go out onto the pitch makes you very excited. You can’t wait to get out there and try and perform your best for your team. During the game I think just moments when you have the ball and you’re attacking the opposition goal, it gets you very excited for what you can do!”

The Welsh winger explains the feeling of heading to a UEFA Champions League match at the Santiago Bernabéu Stadium, home of Real Madrid C.F:

“The nights in the Bernabéu are absolutely incredible. Coming to the stadium in the coach the fans line up the streets in their thousands, there’s just an incredible atmosphere and you can really feel the excitement going into the stadium.”

And Gareth also gives an insight into his preparation before he heads out onto the pitch:

“I have some routines that I like to go through before games and before I go out onto the pitch. I think everybody has their own routines or superstitions to get themselves prepared and it puts you in a good frame of mind ready for the game.”