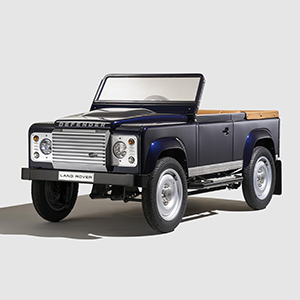 With production of current Defender now in its final phase, the unique pedal car concept represents a fitting tribute to the one of the world’s most iconic vehicles; the Series Land Rover and Defender has been produced in Solihull, UK, since 1948.

The exclusive Defender pedal car is hand built in the UK and styled to commemorate the legacy of the first-ever pre-production Land Rover affectionately know as ‘Huey’ given its original numberplate of ‘HUE 166’.

The concept model is constructed using a rolled–edge aluminium frame complete with individual chassis number and personalised numberplate. It is hand finished in the same Loire Blue found on the full-scale Defender colour palette.

The show car is meticulously hand built in the UK and this exclusive version is constructed precisely to scale to incorporate all of the Defender’s distinctive characteristics such as protective chequer plate, cylindrical running bars and rugged off-road tyres complete with mudflaps.

The drive assembly is constructed to enable the young driver to pedal both forwards and backwards while a spring suspension and working brakes – complete with parking brake – will allow the little one to go on many big adventures.

It’s no different inside, where engineers have drawn on their passion and experience for creating special commissions by constructing an authentically styled dashboard, working hooter and rear stowage section with cover. A leather finish and trimmed seats and steering wheel complete the overall design of the Defender pedal car.

Jaguar Land Rover’s Director of Branded and Licensed Goods Lindsay Weaver said: “This is both a wonderful collector’s piece and children’s toy. It demonstrates our ability to produce goods with world class quality and attention to detail that can emulate our world class Jaguar and Land Rover cars.”

The final production version of the Land Rover pedal car concept is expected to cost around £10,000.