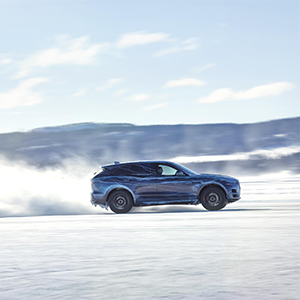 From the searing heat and dust of Dubai to the ice and snow of Northern Sweden, the new F-PACE has been tested to the limit in some of the most inhospitable environments on earth.

Jaguar’s performance crossover offers an unrivalled blend of performance, design and practicality.
To ensure that every system functions perfectly even under the most extreme conditions, the new
F-PACE has been subjected to one of the most demanding test programmes the company has ever devised.

“We developed the F-PACE to offer the ride, handling and refinement demanded from a Jaguar, together with exceptional levels of ability and composure on all surfaces and in all weathers.

“Just as we paid obsessive attention to detail over the engineering of every single component, we’ve exhaustively tested the F-PACE in the most challenging conditions to ensure that it will exceed the expectations of our customers around the world.”
Andrew Whyman, Vehicle Programme Director, Jaguar F-PACE

In Dubai, ambient temperatures can exceed 50°C in the shade. When vehicles are left out in direct sunlight, cabin temperatures can soar to 70°C – exactly what’s needed to ensure that everything from climate control systems to infotainment touchscreens function perfectly in extremes of heat and humidity.

And while the test engineers can relax in air-conditioned comfort as they drive in city traffic, this part of the test cycle is designed to place the cooling systems under very high load through a combination of high ambient temperatures and low airflow.

The F-PACE has also been driven over gravelled mountain passes. This is the first time that a Jaguar test programme has included this uniquely challenging environment, and it is this attention to detail that will help to make Jaguar’s first performance crossover the benchmark in its segment.