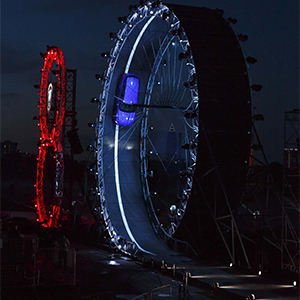 Jaguar’s first family sports car has defied gravity by performing a record-breaking 360 degree loop, one day ahead of its global motor show debut in Frankfurt.

The all-new Jaguar F-PACE, the world’s most practical sports car, was driven with daring precision by expert British stunt driver Terry Grant. The F-PACE sped through the specially built structure, using its sports car derived technology and world-class collection of safety features to complete the record loop and officially signal the opening of order books worldwide.

Ian Callum, Director of Design for Jaguar said: “The Jaguar F-PACE is an SUV with the soul of a sports car. When we created this car we thought differently; we took a Jaguar sports car and made it family friendly. The F-PACE exudes performance yet you can fit five people and all their belongings in it. This is a car for people who love driving, who love design and who love technology – this is the ultimate practical sports car.”

The extraordinary feat, showcased the powerful design of the lightweight F-PACE and its ability to combine agility with sports car speed and performance.

Fiona Pargeter, Global PR Communications Director, Jaguar Land Rover, said: “The F-PACE is a family car that is fast, fun and full of charisma, so completing the world’s largest loop the loop was the perfect reveal moment. The F-PACE is packed full of innovative technology and features the world’s most-advanced in-car entertainment system, matched with super-fast wifi connectivity. Customers are going to go loopy for the Jaguar F-PACE.”

Pro Driver Terry Grant undertook two months of intense physical and dietary training to ensure his body was prepared for the 6.5 G-Force, which is greater than the forces experienced by space shuttle pilots.

Months of planning went in to ensuring that both car and driver could complete this world record-breaking challenge. Precise physics, angles, speeds and dimensions were considered by a team of experts including structural engineers, mathematicians and safety experts.

Terry Grant, legendary stunt driver, said: “Driving the world’s largest loop tonight was a very proud moment in my career. The F-PACE’s supreme performance credentials and rigid lightweight structure gave me complete confidence that I had the strength and driving agility needed. I am delighted to bring the Guinness World Record back to the UK and help Jaguar run rings around their competitors ahead of the motor show tomorrow.”

Pricing for the F-PACE range starts from £34,170 and will go on sale from Spring/Summer 2016. For full range details and pricing please visit: http://newsroom.jaguarlandrover.com/en-gb/jaguar/

To celebrate the launch of the all-new F-PACE, a special model called the First Edition, priced at £65,275 in the UK, will be available in strictly limited numbers and in the first year of production only. Powered exclusively by the 300PS 3.0-litre V6 diesel engine, the First Edition is distinguished by a unique metallic paint colour – Caesium Blue; a clear reference to the breakthrough C-X17 concept unveiled at the 2013 Frankfurt Motor Show. Further highlights include 22-inch Double Helix 15-spoke wheels with Grey finish and contrast inserts, Adaptive Dynamics, Adaptive LED headlights, Gloss Black fender vents and a panoramic roof.