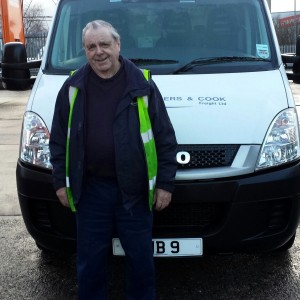 A great-grandfather of six is putting the brakes on his lorry driving career after an incredible 50years with the same logistics company.

Don Fisher, 79, joined Chambers and Cook Freight, Birmingham, on February 17, 1964 – and will retire after reaching his 50th anniversary next month.

Mr Fisher, of Bordesley Green, will celebrate the milestone with a special celebratory evening for all staff.

“This is the best company I’ve ever worked for and I’ve been really happy here which is why I never moved on,” he said.

“It has grown a lot since I first started and the vehicles have got better and better as the fleet is updated regularly.

“I’ve got no plans for my retirement apart from to have a bit of a rest.”

“As a family-owned and run business, Don feels like part of the family along with his two sons who also are long-term employees.

“We wish Don a long and happy retirement.”