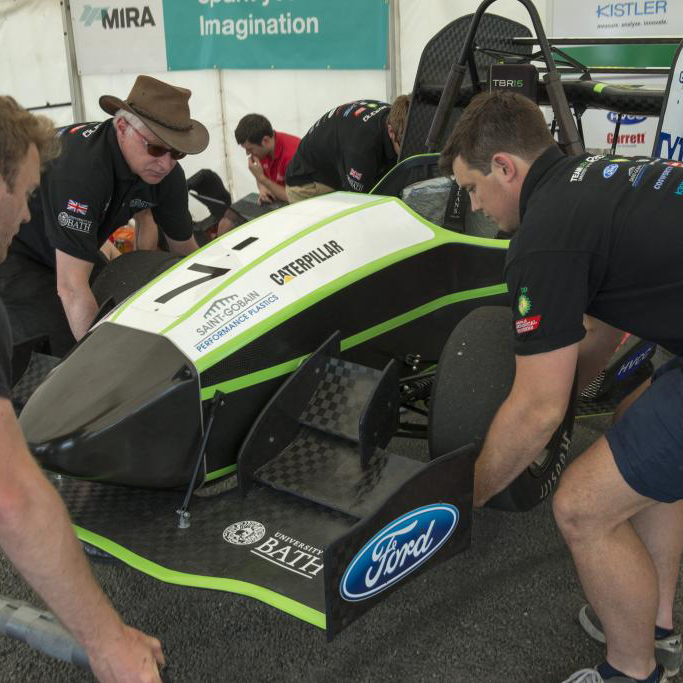 Ford is supporting teams of university students who have entered the annual “Formula Student” engineering competition.

Formula Student oversees young engineers designing and building their own single-seat cars, which are raced against other university teams, from Europe and around the world. Ford is aiding teams from Bath and Loughborough Universities and Imperial College London – all of which are Ford Blue Oval Scholar universities*.

Formula Student is run by the Institution of Mechanical Engineers with nearly 600 universities taking part in 15 events globally.

The Bath, Imperial College and Loughborough teams prepared their single-seater cars over 16 months, with over 50 undergraduates participating in the planning and development of each car.

Teams are required to give a presentation on the costs of building the car, to prove its financial viability. The car is then put through several static and dynamic tests designed to scrutinise the cars speed, braking and aerodynamics.

Kate James, second year Mechanical Engineering student at Loughborough University and Head of Operations for their Formula Student team, said: “Being part of such an energised Formula Student team at Loughborough has not only allowed me to be involved in the process from the concept stage to final product, but has also inspired and equipped me with valuable experience to take into my industrial placement and future engineering career.”

The three university teams have each been awarded a Ford Operation Global Goodwill grant, as part of their Ford Scholar status.

“Ford is delighted to be able to provide these donations to support students in this special competition, which encourages aspiring engineers to develop careers in the automotive industry,” said, Angela Morley, supervisor of University Research Projects at Ford. “Events such as this provide an inspiration for engineering students to become the creators and innovators of the future.”

Formula Student teams also compete in the Bosch Diesel Eco Drive Challenge, which took place on 9 July. Using the latest, cleanest diesel-powered Ford Fiesta vehicles, teams of four from each university compete against each other to be crowned the most economical drivers.

Formula Student 2015 takes place at Silverstone circuit from 9 July to 12 July, with over 3,000 students taking part. More information on the event can be found at www.events.imeche.org/formula-student/

*The Ford Blue Oval Scholarships were established in 2011 to celebrate the centenary of Ford of Britain, and aims to help develop the UK’s next generation of student engineers, scientists and innovators.