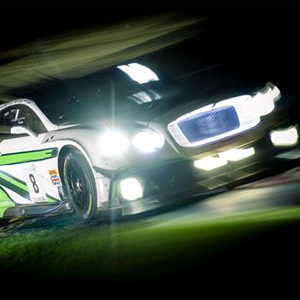 Bentley Motorsport has finished in second place in the largest GT3 race in the world, the 24 Hours of Spa, with its #8 Continental GT3 and drivers Maxime Soulet (BE), Andy Soucek (ES) and Vince Abril (MC).

With a carefully pre-determined race strategy, the Bentley Team M-Sport crew ran out-of-sync with many of the leading GT3 competitors for most of the race but the long-term gains came to fruition in the final stages of the 24-hour endurance event.

In the final hour of the race, Soulet emerged from the pits just 10 seconds behind the #25 Audi that soon became race leader. Despite pushing hard to the end, the #8 car couldn’t close the gap and the team celebrated second place in one of the toughest motorsport events in the world after 546 laps and more than 3,800 km of flat-out racing.

The points collected from strong positions at the six, 12 and 24 hour marks mean Bentley Team M-Sport retains the Blancpain GT Series Endurance Cup lead with only one other competitor able to challenge for the title at the final round in Barcelona at the end of the season. The team has also closed the gap to the overall Blancpain GT Series Teams title to just six points, with three rounds remaining including Barcelona.

“To have just a few seconds separate first from second after 24 hours of racing shows what a closely-fought championship Blancpain GT Series is,” commented Bentley’s Director of Motorsport Brian Gush. “Taking a podium place in such a challenging event is the reward for a dedicated effort by the entire team. We leave Spa leading three separate Blancpain championship titles, and our attention now turns to delivering the same focused preparation for the last three rounds of the championship.

“I couldn’t have asked for more from the drivers and pit crew who fought so hard to get us onto the podium today. Many people questioned our strategy early on in the race but we knew the race would come to us in the later stages. These races are no longer traditional endurance events – they’re sprints that last 24 hours – and in its 500th race start we have shown the pace and reliability of the Continental GT3 once again.”

The next round of the Blancpain GT Series takes place at the Hungaroring near Budapest in Hungary on 25-27 August.