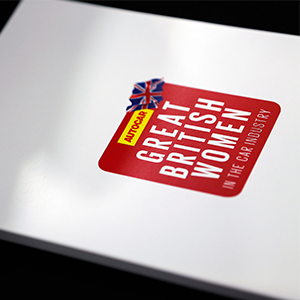 Rising stars wishing to be considered for this year’s Autocar Great British Women in the Car Industry shortlist must be nominated by 3 April.

Run by Autocar, in association with the Society of Motor Manufacturers and Traders (SMMT) and backed by Direct Line Group, Ford and Jaguar Land Rover, the aim of the event is to identify and promote the sector’s most promising female rising stars and highlight the career opportunities within the industry.

The top 100 rising stars will be selected from the following areas of the car industry: vehicle development, manufacturing, purchasing, retail, marketing, communications, apprentices, motorsport, design, and executive. A winner will be selected from each industry sector, with an overall winner then chosen from that shortlist.

Candidates must be nominated by friends, colleagues or their employer. There is no age limit. The shortlisted winners will be chosen based on their influence – and potential future influence – on the automotive industry and within their company, taking into account the size and strength of the business they represent. Dedication to a career in the automotive industry will also be favoured, as well as potential to inspire others to join the industry.

In the first instance, the candidate’s name and CV, along with a short description of their achievements to date and in particular their potential for the future, should be sent to jim.holder@haymarket.com. There is no limit on the number of nominations.

The Autocar Great British Women in the Car Industry judging panel will be chaired by Haymarket Media Group’s Automotive brand director Rachael Prasher. The panel – comprising Jim Holder, Steve Cropley and Rachel Burgess from Autocar’s editorial team, plus the SMMT’s chief executive, Mike Hawes, and director of communications and international, Tamzen Isacsson – will select the industry’s top 100 rising stars at a judging day ahead of the main event.

Those 100 finalists will be announced on 21 June at a day-long event at Twickenham Stadium, with panel debates, discussions and work groups taking place for winners and invited guests.

“We’ve already had some brilliant nominations for rising talent in the automotive industry, but with the deadline fast approaching we want to make sure that everyone who should be recognised is put forward,” said Prasher. “Last year’s event was a resounding success, attracting a huge amount of coverage for our winners and highlighting the great industry in which we work.

“This year’s focus on rising stars highlights the opportunity for rewarding careers in the automotive sector and allows us to put a spotlight on its brightest upcoming stars. Our event at Twickenham Stadium is already shaping up to be an exciting and engaging one, with some industry greats primed to debate and discuss the hot topics around this subject.”

Space for the event at Twickenham Stadium is strictly limited, with priority being given to 2017 and 2016 winners. However, it is anticipated that a limited number of tickets will be available. Anyone interested in attending should contact Charlene Harry, Haymarket Automotive brand executive, at autocar.events@haymarket.com.