Audi set to reveal its next leading light 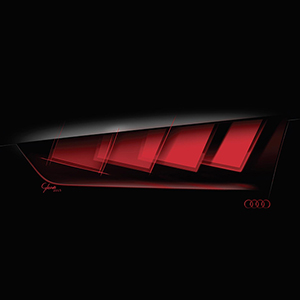 Audi is presenting the next step in its pioneering automotive lighting programme at the IAA in Frankfurt. The Vorsprung durch Technik brand is forging ahead with new Matrix OLED lights that open up further creative opportunities for design due to their thin and flat composition and significantly increased homogeneity, which makes them even more adaptable within today’s lighting installations than point light sources like conventional LEDs.

As the leading brand in automotive lighting technology, Audi has systematically developed all aspects of OLED technology over the years. Matrix OLED lights are a perfect synthesis of high-tech engineering and design – initial projects are currently underway to implement OLED technology in production rear lights. They are being shown for the first time in a concept car at the IAA.

In each Organic Light Emitting Diode or OLED unit, two electrodes – of which at least one must be transparent – incorporate numerous thin layers of organic semiconductor materials. A low DC voltage – between three and four volts – activates the layers, each of which is less than one‑thousandth of a millimetre thick, to light them. The colour is based on the molecular composition of the light source.

In contrast to point light sources – such as LEDs – which are made of semiconductor crystals, OLEDs are flat light sources. Their light attains a new level of homogeneity, and its dimming is continuously variable. The lights do not cast any shadows and do not require any reflectors, light guides or similar optical components – and this makes the OLED units efficient and lightweight. In addition, they hardly need any cooling.

Progress in OLED technology is being made rapidly – in part due to the driving force of Audi. As soon as further increases in light density are realised, OLEDs will soon be able to generate turn signal and brake lights too. The thin glass sheets that are used today to encase the organic material will be replaced by plastic films. These new flexible substrate materials will lend themselves to three‑dimensional forming, and this will open up entirely new creative spaces for designers.

Audi has already shown the potential of OLED technology in many models and demonstrators. Special highlights are “OLED lighting” with transparent, multi-colored OLEDs in the silhouette of the car and “the swarm” with a three-dimensional OLED display.

Another benefit of OLEDs is that they can be subdivided into small segments that can be controlled at different brightness levels. In addition, different colours and transparent OLED units will be possible. This enables new lighting scenarios with extremely fast switchover times. The illuminated sub-surfaces exhibit very precise boundaries with one another. This is what distinguishes OLED technology at Audi, transforming it into the Audi Matrix OLED technology that supplements Audi Matrix LED and Matrix Laser technologies for headlights.

More information on Audi lighting technology is available at the Audi Media Centre.