Scania’s low-entry L-series has all the capabilities that are required of a truck designed for urban areas. With the Scania DC07 engine added to the L-series line-up, the load-carrying capacity now increases by some 360 kilos. It is available in three diffe­rent power outputs: 220, 250 and 280 hp. 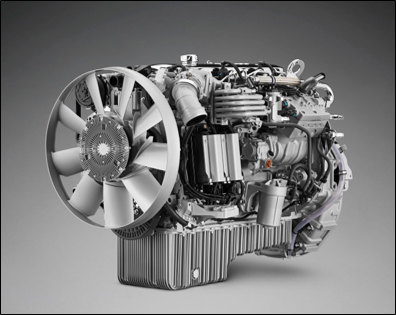 Scania’s 7-litre, inline six engine DC07 is available with three different power outputs with 280 hp
on top. It is recognised for its smooth and cultivated power delivery already from low revs.

With the introduction of the L-series in 2017, Scania made a strong mark in the urban heavy commercial segment. As a dedicated low-entry vehicle, the L-series affords excellent cross-cab access, state-of-the-art levels of direct vision and ease of driver entry – all while maintaining the capabilities and driving characteristics that are synonymous with Scania.

Launched with a 9-litre engine, the L-series is already proving a success in the urban arena. With the option of a 7-litre engine, it can now be optimised for a wider range of city-based operations.

“Initially, we primarily focused on certain applications with slightly heavier operations by offering the L-series with our five cylinder, 9-litre inline engines,” says Stefan Lindholm, Senior Product Manager, Scania Trucks. “However, what was assumed from the outset was later confirmed; there is a demand for solutions based on the lighter and more flexible 7-litre engine as well.”

This development shows Scania’s commitment to drive new standards of safety and driver engagement throughout the urban segment.

Initially only offered in combination with P-series cabs, the Scania DC07 was launched in 2017 and was immedi­ately praised by media and customers alike for its smooth performance, low noise and fuel-efficiency. It is a light-weight, robust and modern inline-six engine with a swept volume of 6.7 litres, offering up to 1,200 Nm of torque from 1,050 r/min in its most powerful 280 hp iteration. It features Scania’s in-house designed exhaust gas aftertreatment system with SCR-only technology and can be fitted with engine-driven PTOs.

“It’s Scania’s smallest truck engine in a long time. But it still carries all the well-known brand characteristics: class-leading fuel-efficiency, our low-rev philosophy and the ability to run on 100 percent HVO or FAME from new with up to 90 percent carbon-dioxide reduction” confirms Lindholm.

A driving force behind the increased demand for “city solutions” are local regulations and a growing awareness about safety:

“Hauliers operating in city areas are facing stricter – and fully justified – demands regarding noise, emissions and the ability to integrate in demanding traffic and interact with pedestrians and cyclists,” says Lindholm. As such, an L-series truck, honed for its operation,  propelled by a DC07 and fitted with a full complement of Scania Safety Assistance systems, can offer drivers and operators a truly optimised transport solution

The smaller engine affords greater space, a benefit that is directly passed on to operators by way of a reduced-height engine-tunnel. The 145-mm decrease in height increases space in the cab, importantly giving a lower position for occupants travelling in the optional centre-mounted seats. All of this means that the L-Series is now even better suited to crewed operations.

Scania believes that typical customers for the new combination will be found amongst hauliers and entrepreneurs that wish to maximise safety on daily operations in urban areas. Many of these companies will be focused in the distribution, construction and refuse collection sectors, but the L-series is equally well suited to all urban applications. In this environment good visibility, superior driver environment, and a favourable total operating economy are decisive.

Made for the city

L-series cabs are available in three different roof heights: low, normal and high. If ordered with the kneeling function, it takes just one step to enter into the cab with a floor height around 80 centimetres. Typical axle configurations for urban application rigids are 4×2, 6×2*4, and 8×4*4 (with Scania’s electrically steered tag axle).

“Trucks such as these often operate in distribution and municipal applications, but we see more and more tailor-made, construction-oriented trucks as well,” says Lindholm. “Many construction vehicles spend most time on congested city streets. Here, an L-series tipper with the DC07 280 hp and the right gearing could be ideal. Combined with Scania Advanced Driver Assistance Systems to support the driver, you have a full-fledged Scania product for the asphalt jungle.”