Scania’s range of industry leading 13-litre engines is now complemented by a 540 hp version. The new engine – DC13 166 – is primarily intended for applica­tions and customers where lots of power and drivability are in demand while weight sensitivity or limitations such as front-axle loads hinder the use of Scania’s slightly heavier V8 engines which start at 520 hp. “True to our promise to always tailor-make our offers, we identified a customer need for a top-of-the-line version of our 13-litre hero,” says Alexander Vlaskamp, Senior Vice President, Head of Scania Trucks. “Our inline six range is industry leading when it comes to fuel performance. Scania trucks with 13-litre engines have been crowned ‘Green Truck’ for three consecutive years in Germany, and that is a remarkable feat.”

Scania is now offering five different performance steps of its most common engine, the inline six: 370, 410, 450, 500 and 540 hp (see chart below).The new 540 iteration shares most of its technology with its 500 hp sibling, like a robust fixed geometry turbo unit with ball bearings instead of journal bearings. 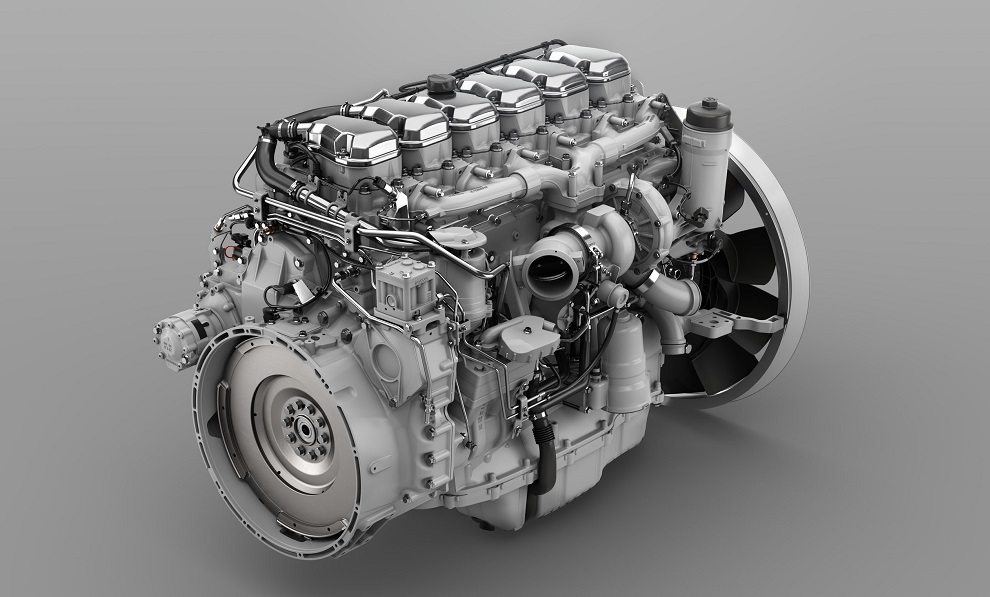 “The powerful 540 is mainly intended for customers and markets where legal aspects regarding front axle loads keep them from choosing a V8,” says Vlaskamp. But it’s
perfect for anyone that needs extra power in their transport operation. Paired with the relevant gearing, this engine will work equally well for a timber truck or for a ‘tulip express’. The latter travel European highways with rather light loads but are conscious about fuel consumption and average speeds.”

What all DC13 engines have in common is their excellent fuel performance and the use of only SCR for exhaust after treatment. The inherent robustness along with services like Scania Maintenance with Flexible Plans contribute to favourable figures for cost and uptime, leading to outstanding total operating economy.

“The improved fuel figures and the power versus weight ratio will make this engine an attractive choice for many Scania customers,” says Vlaskamp. “Developing 2700 Nm of torque at just 1000 r/min allows everything from a vehicle specified for high speed cruising while using a low axle ratio to keep engine revs low at top speed, to excellent startability via hub reduction axles in applications such as forestry.” 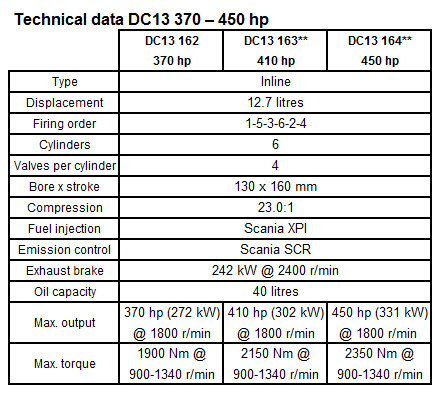 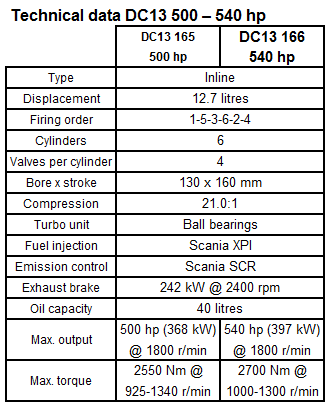 ** Also available in a version that can use up to 100 percent biodiesel, such as FAME.

All Scania’s Euro 5 and Euro 6 diesel engines can run on a mixture of up to 100 percent hydrotreated vegetable oil (HVO) and any proportion of diesel and HVO, regardless of the engine family.