Highways England: What a difference a year makes

Fascinating new footage released by Highways England offers a bird’s eye view of progress being made on the £78 million transformation of a busy M6 junction to tackle congestion problems.

One year on since work began, these new images show the new bridges beginning to take shape that will double the number of lanes over the M6 at junction 10 and replace the 50-year-old structures currently in place.

The new bridges being built are bigger and will increase the number of lanes from two to four, removing the traffic bottleneck in Walsall and significantly reducing delays for drivers.

The foundations for the bridges are now complete and work has begun on building the abutments either side of the junction. The first of the bridge beams is expected to be put in place in the spring. This will see specialist, 1000-ton mobile cranes brought on site to lift the beams into place.

The work on the junction is a joint venture between Highways England and Walsall Council, supported by the Black Country Local Enterprise Partnership. Contractor John Sisk & Son is carrying out the work.

Highways England Project Manager, David Reed, said: “Despite the challenges of the last year we have continued to make good progress on the scheme and we are still on track to finish the work in spring 2022.

“We know how important these improvements are for drivers, businesses and the local communities who have been enduring severe congestion at junction 10. We are pleased with the progress being made on this much-needed solution to their problems.

“The new, larger junction will increase capacity meaning drivers can enjoy more reliable and smoother journeys. And by replacing these bridges – which have been in place for half a century – we are also avoiding the need for extensive maintenance in the near future.”

Deputy Leader of Walsall Council, Cllr Adrian Andrew said: “It’s heartening to see so much progress being made on this vital junction. The increased capacity the scheme will provide will be an important factor in easing congestion and supporting the economy of Walsall.”

As well as work on the junction itself, the westbound carriageway of the busy Black Country Route is being widened from two to three lanes from junction 10 to Marshlands Way. 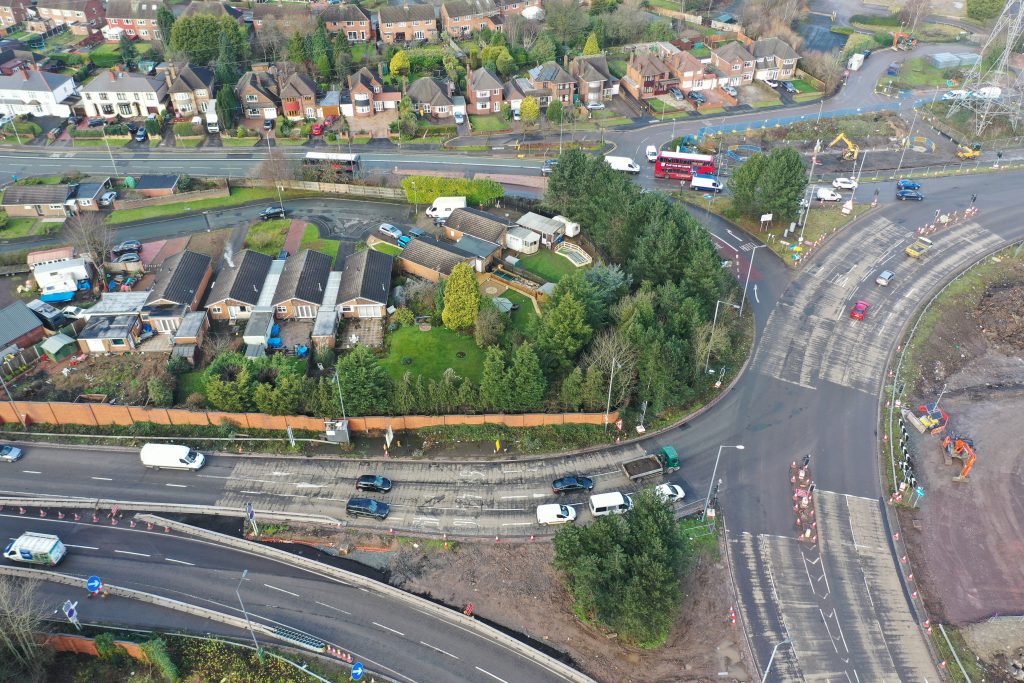 In the bottom left corner of this image, the new third lane is being constructed on the Black Country Route westbound carriageway

The congestion at junction 10 there was identified as one of the main transport issues facing the region in the West Midlands Strategic Transport Plan.

Andy Street, the Mayor of the West Midlands, said: “It is brilliant to see how work is progressing on overhauling junction 10 despite the challenges the pandemic has presented, with the ongoing work helping to both create and protect local jobs for local people.

“My attitude throughout the pandemic has always been that we cannot have our major schemes knocked off course, and it is brilliant to see Highways England pressing on and delivering the improvements the junction needs to ease congestion for drivers and drive economic growth.”

Tom Westley DL, Chair of the Black Country Local Enterprise Partnership, said: “We are delighted that this new footage shows the progress that is being made on the M6 junction 10 project, particularly as this progress has taken place during what has been a hugely challenging period of time.

“The improvements to junction 10 will not only support the movement of traffic but bring benefits to the road network, and business, for future years. Reducing delays and increasing capacity will support the Black Country’s continued economic development, particularly as we focus on economic recovery post pandemic.” 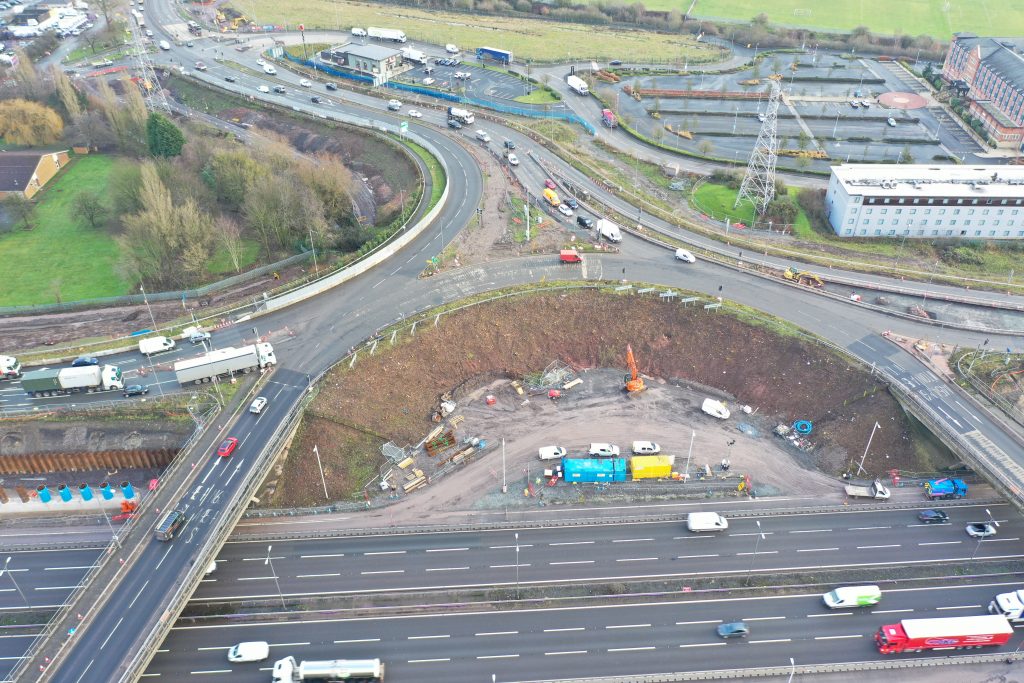 Looking east towards Walsall, this image shows work under way to widen the A454 approach to the roundabout

The official sod-cutting event for the start of work was held on Friday 31 January last year with Mayor Andy Street and MP Eddie Hughes among those who attended. Work got under way the following week.

In line with Government policy, the construction work has continued following strict safeguarding measures to prevent the spread of Covid-19. None of our sites are open to the public.