Highways England have decided that the speed limit through most of England’s motorway roadworks will be raised from the current 50mph to 60mph. 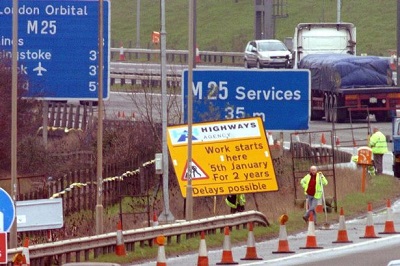 Having conducted “extensive research and trials” they say that it will help to increase traffic flow and ease driver “frustrations”, however, depending on road layout and the particular work being undertaken, the 40mph and 50mph restrictions will continue to be used.

Highways England has tested the increased speed limits including those between junctions 13 and 16 on the M1, and found that the journey time for the 24 mile stretch was reduced to just over a minute.

Chief executive Jim O’Sullivan said: “Road users understand that roadworks are necessary, but they are frustrated by them, so testing 60mph has been about challenging the norm while ensuring the safety of our people working out there and those using our roads.

“We have a huge programme of work planned, so being able to use 60mph where safe will continue to improve everybody’s experience of our roads.”

He said: “Sticking at 50mph often leads to other drivers tailgating in order to try to force vehicles to pull over.

“Plus we have very long stretches of roadworks such as the 32 miles being converted to smart motorway on the M4 between junctions 3 and 12, where 60mph would seem much more appropriate.”

The 10mph increase was suggested in 2017. At the time, the Unite union said: “Sadly, in recent years there have been several deaths of motorway workers and these changes will make their work even more dangerous.

“Already motorists frequently drive into coned-off areas. At increased speeds, it will make such potentially lethal accidents even more common.”

Hauliers and transport buyers are increasingly moving towards refrigerated liquefied natural gas as a cheaper and more environmentally friendly alternative to diesel. In order to meet those

To celebrate 40 years of the Master LCV product,