A further injunction has been approved Friday 24 September by the High Court against climate activists who have been carrying out a string of disruptive demonstrations along major roads and at the vital Port of Dover, attempting to cause blockages and travel chaos for tens of thousands of people. 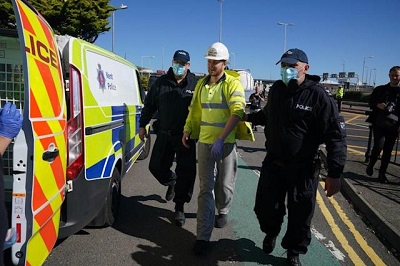 With immediate effect protesters will be in contempt of court if they breach the terms of an interim injunction won by National Highways today.

Breach of the injunction can be punishable by up to two years in prison and an unlimited fine, serving as a deterrent for anyone thinking of re-joining the disruptive action.

The Government’s intervention will help dissuade activists from carrying out any further disruption.

Transport Secretary Grant Shapps said: “We are absolutely committed to protecting the right to peaceful protest, but it is unacceptable that people cannot go about their day-to-day businesses and that businesses, or critical supplies should be put on a knife’s edge because of the reckless actions of a few protesters.

“I commend the work of Kent Police and the Port of Dover authorities today to quickly resolve the issue and keep our critical supplies moving, and I will do everything to prevent these sort of guerrilla tactics from putting people’s lives at risk and keeping our emergency services away from the communities that need them.”

Home Secretary, Priti Patel said: “The British public are rightly furious that the behaviours of a selfish minority have been putting lives at risk and causing untold disruption on our roads and now at Dover.  We will not tolerate the recklessness of these few activists and the police continue to have our full support in cracking down on their dangerous behaviour.

“The public and the police want officers back serving their communities and cutting crime, not dealing with people happy to put the safety and needs of others at risk.”

The Government is already ending the sale of new petrol and diesel cars in the UK by 2030, investing billions of pounds to help industry and drivers make the switch to cleaner vehicles, and will continue its work to install thousands of chargepoints and boost the development of new technologies to meet ambitious net zero goals.

Campaign group Insulate Britain’s recent demonstrations have led to considerable disruption on one of the UK’s busiest motorways – creating a backlog of traffic and more pollution – as well as blocking the emergency services from reaching those whose lives are in danger.

Over 200 people involved with the demonstrations have already been arrested and previous actions of Extinction Rebellion – of which Insulate Britain is an offshoot – has cost the UK taxpayer £50million.