Department for Transport: £93m for road upgrades and repairs

As part of the Government’s commitment to fuel the economic recovery from Covid-19, the Transport Secretary Grant Shapps has today (Saturday 30 January) pledged £93m for major road upgrades across the country. 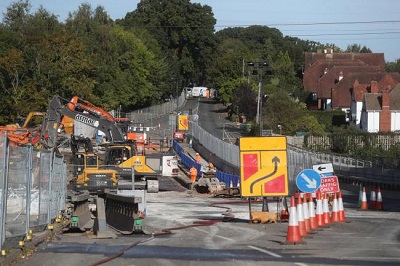 The Northern Powerhouse is set to receive over half of the funding, with up to £56m for a dramatic overhaul of the Kex Gill section of the A59 in North Yorkshire. This will significantly improve connectivity between the historic northern towns of Harrogate and Skipton. The proposed new road will divert traffic away from the landslip-prone Kex Gill part of the route, helping to remove traffic from nearby villages and offering more reliable journeys to thousands of people in the region every day.

The West Midlands will benefit from a £24m investment to reduce congestion at Birchley Island, situated at the intersection of the M5, A4123 and A4034 – which is expected to boost employment, improve air quality and increase the region’s manufacturing output. The proposed scheme will widen the existing carriageway on the roundabout and introduce additional lanes, all of which will improve connectivity between the midlands and the national motorway network. Pedestrians and cyclists will also see improved facilities for greener travel at the intersection.

Elsewhere, Hampshire is in line for £13m worth of crucial upgrades to the Redbridge Causeway bridges over the River Test, which carry roughly 60,000 vehicles a day. The bridges provide important access for local businesses and hauliers to the Port of Southampton, and link the New Forest waterside area to Southampton. Today’s funding follows ministers’ agreement to speed up delivery of the proposed maintenance work, which will ensure journeys in the region remain safe and reliable for tens of thousands of road users while more disruptive works – hampering people’s ability to use the vital route – aren’t needed in the future.

Transport Secretary Grant Shapps, said:  “I am delighted to announce this significant funding package which will ensure millions of people can continue to travel easily and safely. It’s further proof of this Government delivering on its promise to level up the country – putting transport at the heart of our efforts to build back better from Covid-19.

“The projects will help people access work and education, as well as ensuring vital connectivity for local businesses.

“While everyone will see the benefits of these schemes in time, for now it’s important to remember to only travel for the permitted reasons while we continue to prioritise protecting public health and preventing the spread of the virus. Through staying at home you can help stop the virus and save lives.”

“This government is pressing ahead with our commitment to level up the country – even through this pandemic – ensuring that everyone has equal opportunity to get on in life regardless of where they live.”

The total cost of the three schemes is expected to reach £107m, with local councils providing the remainder of the funding following the Department for Transport’s £93m investment – pending the completion of all legal processes.

Jack Cousens, head of roads policy for the AA, says; “Just last week, AA members said that the nation’s roads were in a state of disrepair so this is welcome news. We desperately need more investment filtering down to local levels as the more local you get, the worse the picture is.

“A third (32%*) of drivers ranked trunk road surfaces as ‘good’, whereas only one in five (19%) felt they could say the same for main roads and fewer still for residential streets (15%).

“It’s not just the moon-like craters on our roads that need fixing, but worn-away markings too. Just one fifth (20%) said markings on local roads were ‘good’, as opposed to nearly two fifths that said markings were ‘good’ on trunk roads (37%).

“Politicians may underestimate how the public views the state of the roads, but the reality is that our members see it as a top priority. More than eight out of 10 (83%) say maintaining good roads is important to them.

“If we are going to ‘build back better’ then improvements need to reach every street and avenue.”