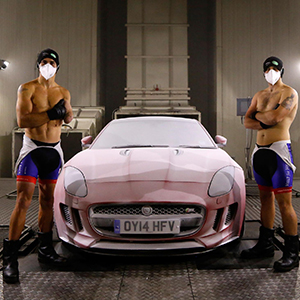 You could cut glass with those

Two wounded Servicemen in training for The Invictus Games have benefited from -40°C cryotherapy recovery sessions at Jaguar Land Rover.

The two hopefuls – Jaco van Gass and Luke Darlington – are aiming to qualify for the British Armed Forces cycling team and were given access to Jaguar Land Rover’s temperature testing facility, following an arduous 40km cycling training ride on one of the hottest days of the year.

Both Jaco and Luke, who were injured in action, are hoping that this unique training opportunity and rapid recovery session will help to give them the edge in the competitive selection process for the Invictus Games in London this September.

Former Private Jaco van Gass, lost his left arm at the elbow while serving in Afghanistan. He comments, “With around 50 days to go until the Games, and even less until the final selection process is taking place, I’m using every spare moment to get some invaluable training under my belt. Thanks to this unique training opportunity from Jaguar Land Rover I’m hopeful that my selection chances have been boosted and that I’ve reached my fitness peak.”

Under the supervision of trained sports therapists and the watchful eye of Jaguar Land Rover engineers, the two brave warriors were chilled by external temperatures as low as -40°C, a practice usually reserved for testing cars in the most extreme temperatures.

Dr Ralf Speth, Chief Executive Officer of Jaguar Land Rover, said, “Jaguar Land Rover is immensely proud to be enabling these Invictus Games. We have been inspired by the passion with which Prince Harry has championed this visionary idea, to celebrate the commitment and achievements of wounded, injured and sick Service personnel.”