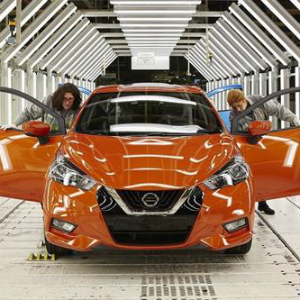 Production of the all-new Nissan Micra has begun, with the first cars rolling off the line in the last few days. Final checks have ensured they are finished to the highest quality. Deliveries to Nissan retailers and customers will commence from mid-February in key European markets, and from March in the remainder.

The start of production marks the beginning of a new chapter in a success story which stretches back more than three decades. First launched in Europe in 1983, Micra is one of the world’s most recognisable model names with global sales of more than seven million cars. This all-new version – the fifth generation – sees it return to the heart of the European B-hatchback segment.

The new Nissan Micra is manufactured at Flins, France, at a plant operated by Nissan’s Alliance partner Renault. The new Micra is the first Nissan passenger car to be built in a Renault plant in Europe, and returns Micra production to Europe – close to its key customer base – after a break of seven years. It is being built on a modified version of Nissan’s V-platform.

Flins, to the west of Paris, is a factory with vast experience in producing hatchbacks for the European market. First opened in 1952, the 237-hectare site is the longest-established car-producing plant in the Renault Group. It is currently home to the Renault Clio and Renault Zoe models.

This ‘cross-production’ of vehicles is a major driver of manufacturing synergies for the Renault-Nissan Alliance, and brings several key benefits to the business and to the customer.

Most importantly, it maximises the advantages of the Alliance Production Way, a manufacturing and shop-floor management system common to Renault and Nissan. As well as allowing plants to make better use of their production capability, this system takes benchmarks and best practice from both brands to ensure the highest quality production standards are met and maintained.

Paul Willcox, Chairman, Nissan Europe, commented: “The start of production for the all-new Micra is a moment to be celebrated, embodying the spirit of co-operation which exists throughout the Renault-Nissan Alliance.”

He added: “We have taken the European compact car segment to a new level by focusing on what customers really want today and expect tomorrow. The all-new Nissan Micra is an exceptional car, characterised by its expressive design, uplifting interior and confident drive.”

The new Nissan Micra is quite simply a revolution. It is a radical progression from the model it is replacing, and from the trio of highly successful superminis which date back to the Micra’s debut in Europe 34 years ago.

The new Micra is longer, wider and lower than ever before. It has been conceived, designed and engineered with European customers’ requirements at the top of the agenda.

Key to its appeal is the car’s athletic and expressive exterior design, which moves the Micra name plate in a daring new direction. The contemporary look and premium feel continues inside, with a high-quality cabin that boasts two-tone soft-touch materials as standard across the range.

The new Nissan Micra is also a technology leader, with a number of features which are not only new to the Micra but new to the segment. These include Intelligent Lane Intervention, a safety system which gently corrects the Micra back on to the right path should it be required.

Also unique is the BOSE Personal audio system, which features speakers built into the driver’s head rest for an exceptional 360° sound experience. The new Micra is available with a wide range of personalisation options, modifying the exterior and interior with premium components in a variety of stylish and contemporary colours.

It is also a fantastic car to drive, with a dynamic performance that is the perfect balance between agility, excitement and the secure feeling that comes with confident and predictable handling. Three engines are available – two petrols and a diesel.