As the government writes to 1.5 million vulnerable people to urge them to stay at home for 12 weeks, the community ethos of the Faxi car pooling app is coming to the fore. 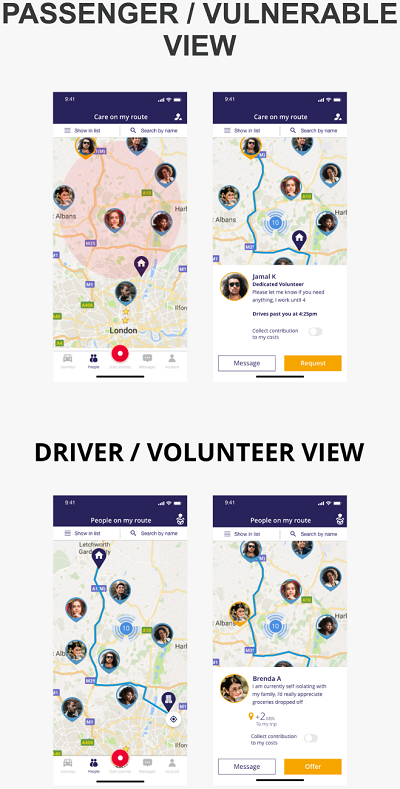 Faxi is a commuter journey sharing app used by many hospitals, local authorities and some of the largest employers in the UK. It is now actively working with its clients to help them use the platform to identify trusted volunteers who want to support their co-workers and make them visible in a map-based social network so that support can be provided for those in need.

Any organisation that is already using Faxi can nominate trusted individuals as ‘dedicated drivers’.  These individuals – including their location – will then be easily identifiable for those who need support (see illustration below).

Other organisations can also set up a Faxi community for free (for up to 20 users) directly from the Internet and start creating communities where volunteers can plan support for those in need.

“This is a case of technology for good”, explained Tony Lynch, co-founder and CEO of Faxi, whose majority shareholder is Toyota Financial Services.  “It can be used by private communities of workers, who might previously have been using the app for journey sharing, to identify those who are available to help others – and those who need help.

“We will be working with our clients throughout the emergency period as we are conscious that many local authorities face a monumental task to provide support to the 1.5m vulnerable and we hope to be in a position to support this effort.  The whole of Faxi is committed to help in this effort if needed.”

Established in 2013, Faxi has revolutionised the concept of carpooling for commuters with its unique smartphone app. The Faxi Software as a Service (SaaS) enables organisations to set up closed, private groups only available to employees, with a route-matching algorithm which suggests potential carpooling partners based on similar routes to work.

Further details on the Faxi Car Pooling App can be found here.