Enterprise Car Club has more than doubled the number of on-street vehicles in Cardiff in response to fast growing demand. Over the past six months, Enterprise has reported a 55% growth in the number of car club members in Cardiff. 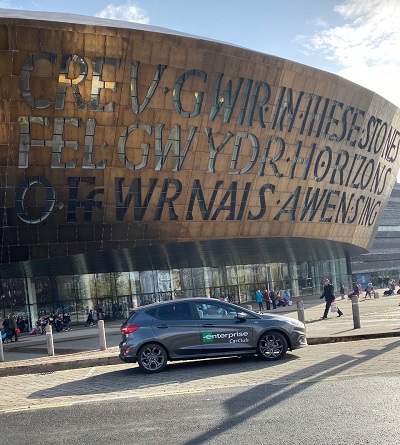 Eighteen low-emission and hybrid vehicles are now available for rental from as little as £5.30 per hour parked on streets across Cardiff, offering quick and easy access to motoring 24/7, 365 days of the year.

The expansion of the car club supports Cardiff Council’s aim of delivering more integrated public and shared transport to reduce congestion, improve air quality and promote active and sustainable travel. Plans put forward in the Council’s recently published White Paper include measures to make car club vehicles easier to access for more people as part of developing a joined-up transport network, which will help people move around as sustainably and efficiently as possible.

Enterprise Car Club is also available at eight other towns and cities in Wales including Swansea, Holyhead and Wrexham, as well as in smaller historic locations such as Monmouth and Ruthin.

Alongside, Enterprise has daily rental branches in Cardiff city centre, two other city locations and a branch at Cardiff airport, offering the widest available range of car and van rental. Enterprise Car Club members can also pick up vehicles at the Enterprise Hadfield Road branch in Cardiff, extending the car club network in the city to 20 vehicles.

Carl Henderson, Enterprise’s General Manager for South Wales, said, “We are delighted with the growth of our service in Cardiff, and the support from the Council and our members. This forms part of our programme of expanding Enterprise Car Club across the UK, reaching communities large and small, to enable more flexible, low emission and value for money access to a car when that is the best choice for a trip.”

Residents and businesses in Cardiff can quickly sign up to Enterprise Car Club by visiting www.enterprisecarclub.co.uk. Smartphone users can book and access vehicles instantly using their phone without the need for keys.