Fleet leasing and mobility expert Alphabet (GB) Limited is today celebrating the company’s Fleet Administration Manager Ashlee Lanchbery being recognised as one of the British Vehicle Rental & Leasing Association’s (BVRLA) ‘Heroes’ for 2019. The BVRLA Hero awards, announced at the BVRLA Dinner in London, is the leasing industry’s annual appreciation of outstanding individuals in the sector who have gone above and beyond over the past twelve months. 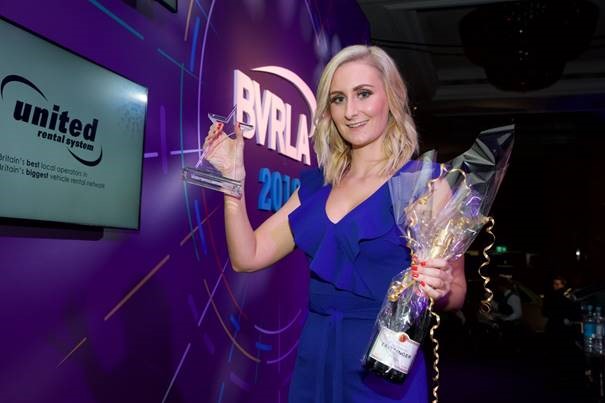 Last night Ashlee Lanchbery, Fleet Administration Manager for Alphabet was one of only two industry professionals recognised this year by the BVRLA as an industry ‘Hero’ and received her award from Chief Executive, Gerry Keaney. Keaney commented: “Dealing with fines and penalty charges is one of the biggest challenges facing BVRLA members and, of course, when handled poorly it wastes time, money and leads to unhappy customers. Ashlee has taken fines management to an art form, leading and delivering a new approach that has led to a dramatic reduction in customer complaints and achieved a six-figure efficiency saving for her employer, Alphabet.”

One of 400 plus employees based at Alphabet’s UK headquarters in Farnborough, Lanchbery has been with the company for nearly seven years and in her current role for over 12 months.  Her key responsibilities include motivating and managing a team of nine people, encouraging continuous improvement and ultimately responsibility for all tasks relating to cherished plates, fines, foreign travel, MOT, RFL and V5 documentation. She experienced the annual BVRLA Dinner in London for the first time as a VIP guest of the industry body, following the nomination from Kelly Kane, Head of Contract Management and Clive Buhagiar, Head of Operational Services.

Lanchbery’s nomination included exceptional customer feedback and detailed outstanding delivery of continuous improvement objectives, with Head of Contract Management Kelly Kane commenting: “Ashlee’s natural leadership style meant she worked with her team to shift their focus and change the mind-set to improve customer satisfaction and achieve process efficiencies. Ashlee has created a culture of trust and empowerment which allows the team space to develop and generate ongoing improvements in our customer journey.

This has contributed to increases in our customer satisfaction levels through proactive engagement and achieving greater understanding of individual needs. Ashlee’s commitment and passion shines through in everything she does. She lives our company values on a daily basis, which has allowed her to develop into the inspiring leader she has become.”

Chief Operating Officer, Uwe Hildinger for Alphabet commented: “On behalf of the Alphabet Executive Team, I want to congratulate Ashlee on joining an exclusive club of ‘BVRLA Heroes’. It is particularly pleasing as she is a well-respected member of my Operations team and it’s great to have a vital, but often less visible area of the business – such as fleet administration – be recognised in this way. This is the second year in a row that an Alphabet employee has been awarded BVRLA Hero status and for me it demonstrates that even in this world of modern mobility where data and insight is crucial, the impact of a talented individual with the right attitude and skillset in being able to drive change, make it happen and have a tangible effect on company performance as well as customer satisfaction, is absolutely invaluable.”