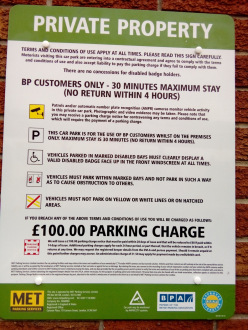 Private parking firms are issuing steep fines to motorists who stay too long at petrol stations, with both BP and Shell garages getting parking companies to fit CCTV cameras at the forecourt entrances and exits, to catch and charge motorists who overstay their welcome. This means drivers who are spending good money filling up on fuel and using on-site facilities are getting hit with £100 fines.

Common law requires that businesses make their time restrictions signs unambiguous, but motorists say it’s easy to miss them on busy forecourts or junctions—even more so after dark—and most motorists aren’t aware that time limits now apply at more and more petrol stations across the country.

Earlier in the year, a motorist using the Shell forecourt in Kilburn received a £100 demand from Euro Car Parks for staying longer than their 20-minute limit and, last week, a driver got a £100 demand after she exceeded the maximum stay at a Shell garage near me. In both cases, the delays arose from queuing for the on-site car washes.

Time limits are a problem at BP petrol stations, too. A recent recipient of one of these demands used the BP garage on Mitcham Road in Croydon, south London. After paying for his fuel, the driver recalled queuing behind around six vehicles to use the car wash but later received a letter threatening debt recovery agents when he didn’t pay a £100 parking charge demand by MET Parking Services from him staying past the permitted 30 minutes limit. 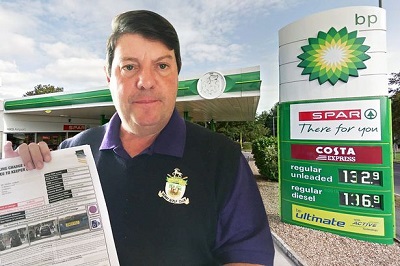 The parking company sent his wife, the vehicle’s registered keeper, earlier correspondence, reporting the car stayed on the site for 47 minutes, demanding payment and offering to reduce the charge to £60 if paid within 14 days. The letter sat unopened until much later, so he paid the £100 in fear of debt collectors arriving at their house. He says he didn’t see any signs advising drivers of a time limit.

Last year at the same forecourt, a motorist noticing a queue for the petrol pump, used the on-site Marks & Spencer’s ‘Simply Food’ shop, resulting in another queue. After vacuuming his vehicle and waiting for the car wash, he’d been on-site 42 minutes and received the same £100 demand. After a difficult appeal, the motorist received a refund but said BP wasn’t interested, even after he told them they penalise their customers for using BP’s services.

Staff from The Guardian newspaper visited the Croydon petrol station and spotted a sign warning motorists about the 30-minute rule, but said it would be easy to miss, more so when heading southbound. After approaching five drivers, they found two of them didn’t know about the time limit, despite having just driven past the sign. After speaking to BP staff, who said the number of similar complaints was a problem, one cashier thought BP was installing cameras at all the 1,200 forecourts in the country because people used the area just for parking.

A spokesman for MET Parking Services said of the BP garage: “The 30-minute maximum is clearly signposted throughout the site. We would encourage any motorist who believes they were issued with a charge notice incorrectly to appeal using our BPA [British Parking Association] audited appeals process. Motorists have the right to appeal to the independent appeals service, Popla [Parking on Private Land appeals], which is a free and easy to use service.”

Shell, who operate over 1,000 fuel stations, says they introduced the parking restrictions at sites with limited space to ‘make it fairer for everyone’ and the customers staying longer to use a car wash should put their vehicle details into the car wash or shop console to avoid receiving any charges.

Barrie Segal, a parking ticket expert and owner of AppealNow.com, said: “The fact that so many motorists have been caught out suggests that these requirements are not being complied with. It beggars belief that BP and Shell effectively penalise their customers for buying their petrol and goods in their forecourt shops. It behoves BP and Shell to ensure that their customers are not penalised. Drivers who feel that they have been unfairly fined should appeal explaining the reasons why the fine is unfair. They should also complain to BP and Shell.”