It wasn’t so long ago that Agility Fleet Operations Director Jacki Stevenson was being encouraged to wear short skirts to work in a former job, and even sacked from another for not dressing in high heels… 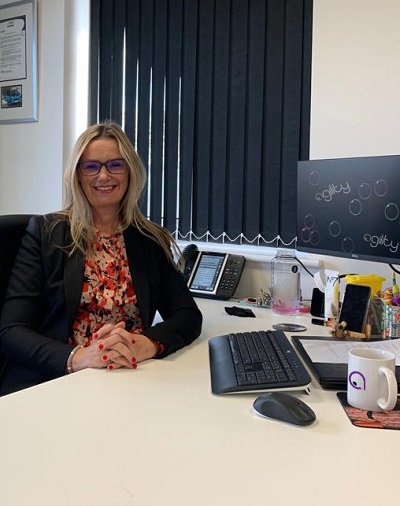 With International Women’s Day being celebrated on Sunday March 8, Jacki is in an ideal position to reflect on how perceptions have changed in the workplace, while praising Agility’s continuous development and empowerment of its staff today.

Agility Fleet is a national provider of vehicle funding and fleet management solutions for businesses, offering a range of leasing options including contract hire for fixed term contracts typically between two and five years.

Jacki started the business with Keith Townsend and has worked in several different departments during her time at Agility, helping the business to win multiple awards including BVRLA’s Unsung Hero Award and Fleet News 50’s Customer Service of the Year Award.

She reflected on a barely recognisable working world when she was making her first steps up the career ladder and wants to use International Women’s Day as a rallying call to all other females to chase their own dreams.

“As a single mum who was often judged and pigeon-holed before having the chance to prove myself, International Women’s Day resonates with me and is an important date in the calendar.”

At Agility, allowing individuals to grow and develop – whatever their gender or background – is part of an overarching company philosophy. Agility boasts a diverse group of people, with one common goal to succeed and be respectful in all of its daily operations.

But in previous job roles, this wasn’t always the case for Jacki, which is why she is so keen to encourage other females to follow her career progression and let their talent do the talking.

To celebrate International Women’s Day, Jacki reflects on past job roles, her career to date at Agility and advice for other females climbing the career ladder:

Yes, I believe perceptions have changed. When I first started selling cars to traders, I had jokes from male Colleagues about being on the carpark in a short skirt. I believe casual comments like this – and general passive views about females – are frowned upon and I feel a lot more respected as time has gone on.

When I worked behind a bar in my local pub I had various comments from customers, which used to be par for the course and generally accepted as the norm. I also got fired for not wearing high heel shoes whilst cooking in the kitchen! I chose to wear Doc Martins and promptly got dismissed.

The main challenge were the general perceptions from others that a single mum couldn’t progress when working part time and bringing up her daughter. There was an inference that I wasn’t good enough to do the same role as a man at times, which was difficult to quantify at times, but certainly a feeling I had.

There are a lot of females in the workplace and our vow at Agility is to attract, engage and develop people – no matter their gender or background. It isn’t relevant if a colleague is a male or female, so long as they can fulfil the role effectively and be a hard working individual and driven to succeed. I am the only woman in a higher position at Agility. I’m the only female in each senior management meeting and fleet management meeting, so I still believe we have room for improvement

There are currently 10 women here at Agility.

Agility Group which is celebrating its 16th year, encourages the growth, development and recognition of all team members, with an employee award given out every month to recognise hard work and dedication. The culture at Agility is seen in its ethos – Integrity, Enthusiasm and Flexibility.