A free app has launched that will change the way drivers buy car insurance forever and hopes to make it cheaper for drivers – and young drivers in particular – to get insured. 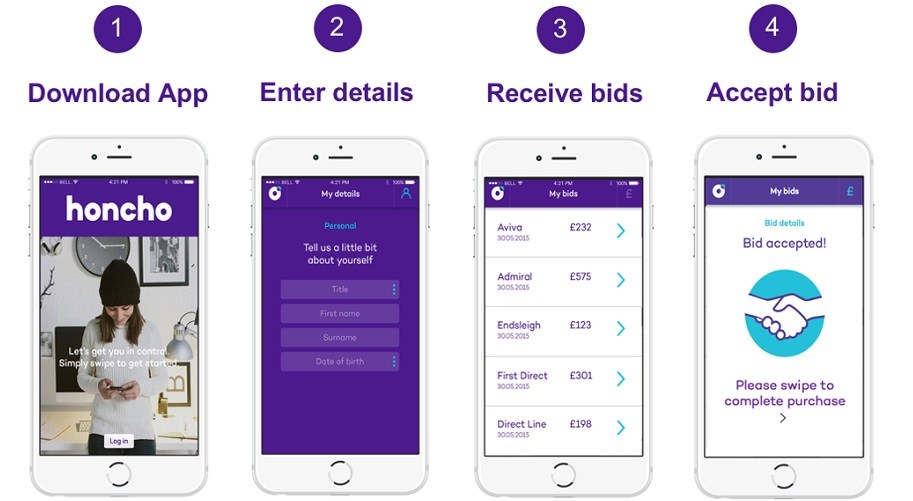 honcho, which is the first reverse-auction marketplace app in the UK, requires insurers to bid against each other for customers, competing for their custom in real-time.

The bidding process takes just 30 seconds, goes through three rounds of bidding in real-time and encourages insurance providers to offer the best possible policy and price to the consumer. During the process insurers get to see how much their competitors are bidding for the customer’s business and can therefore reduce their own prices to try to win.

Unlike price comparison websites (PCWs), which charge insurers expensive commissions of up to £60 per policy which is passed onto the consumer within the price they pay, honcho charges insurers and brokers just £1 to compete for consumers’ custom. This encourages more competitive policy prices for motorists.

Users are able to request further bids, and the insurers’ or brokers’ £1 fee allows them to re-bid for each user as often as asked across a four-week period.

honcho aims to reduce insurance costs for all – and especially for young drivers aged 17-24, who typically fork out £1,177 or 149% more than the national average on annual car insurance fees.*

The service is also being used by insurance providers who have a particular focus on making the cost of driving cheaper for younger drivers, including Marmalade and Think Insurance.

It also looks to make finding affordable policy quotes quicker and easier than ever for motorists, as they only need to submit the data for their car once, then can sit back and watch the bids roll in on their smartphone, tablet, desktop or laptop.

The honcho app aims to challenge price comparison websites (PCWs) which have come under increasing scrutiny over the last year for charging insurers expensive commission fees and often preventing insurance providers from offering better prices on their own websites.

For launch, honcho are focussing on the young driver market, and multiple insurance providers including some of the UK’s most recognised brands are now bidding for customers’ business on the platform, including Brightside, Flux Direct, Quoteline Direct, Freedom Brokers, Marmalade and Think Insurance, with insurance underwritten by well-known names including Aviva, Axa, LV, Ageas and Zurich and with many more to follow in the coming weeks.

Gavin Sewell, CEO of honcho, comments: “It’s been a long time in the making and words can’t describe the level of excitement that can be felt around honcho HQ now that the service is live to the public.

“honcho is one-of-a-kind and will be revolutionary for drivers of all ages.  However, we’re especially keen to see the benefits to young motorists who, for so long, have struggled to acquire fairly priced policies – with many paying 149% more than the average driver.

“We see honcho taking on the role of ‘matchmaker’ between customers and insurers or brokers, initially for car insurance, but with a view to offer the service across a range of other insurance products and markets later this year.

“We’re also very much championing consumers’ interests with absolute clarity and transparency in all that we do. It’s going to be the way forward and price comparison websites are going to feel us hot on their heels.”

Andy Martin, Broker & Distribution Director at Marmalade, comments: “It’s a very exciting time for all involved – as soon as we heard of honcho’s proposition, we knew we wanted in. This new app has the potential to really shake up the way insurance is delivered and we’re especially excited to be reaching out to more young drivers to help them drive down the cost of insurance with the help of our black box technology.”