The Hyundai IONIQ Electric has been named the best Electric Family Car on sale in the very first What Car? Electric Car Awards. The judges praised IONIQ Electric for offering a better package ‘than any other rival’ – whether that’s its electric range, its value for money, its equipment or its technology. 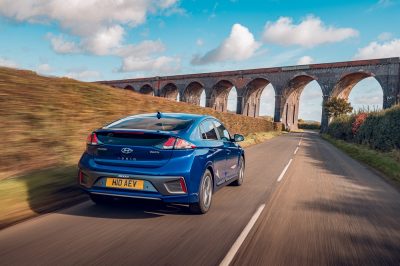 IONIQ Electric launched in 2016 as part of the IONIQ range, the world’s first car planned from the start to offer three electrified powertrains – hybrid, plug-in hybrid and full electric. In 2019, the IONIQ range was upgraded with added technological features and a refreshed look, as well as 36% added battery capacity in the Electric.

Since its launch, IONIQ has picked up a number of awards, including being named the UK’s most highly-rated car in the Honest John Customer Satisfaction Index. For this latest accolade, the What Car? experts praised IONIQ Electric for its compelling overall package, offering better value for money, technology, range and drivability than its rivals.

The What Car? team said: “Promising up to 193 miles between charges, the IONIQ will get you farther than regular, 40kWh versions of the [Nissan] Leaf, as well as the BMW i3 and Volkswagen e-Golf… The IONIQ is simply bursting with equipment, too, including heated front seats in our recommended Premium trim… And if anything should go wrong, you’ve got a five-year, unlimited-mileage new car warranty to fall back on – more than is offered by either Nissan or BMW. All in all, the IONIQ Electric makes the transition to zero-emissions power as easy as possible.”

The IONIQ Electric is one part of Hyundai’s electrified line-up; one of the broadest and most affordable in the UK. Alongside IONIQ Hybrid, Plug-in Hybrid and Electric sit the Kona Electric, Kona Hybrid and mild hybrid Tucson models. By the end of the year, three quarters of the entire Hyundai range will be electrified, new 48V mild hybrid i20 & i30 and Hybrid & Plug-In Hybrid Santa Fe and there is more to come. With increased supply and no waiting time, owning a low or zero emission vehicle from Hyundai is now more accessible than ever.

Ashley Andrew, Hyundai Motor UK MD, said: “We’re thrilled to see one of the world’s most trusted consumer brands rating IONIQ Electric at the top of its class, especially compared to some very well established competition. This year, and into the future, Hyundai will be one of the UK’s leading suppliers of electric vehicles, with a range of vehicles delivered to offer exactly the qualities that the team at What Car? has found of IONIQ – they’re practical, affordable, innovative and great to drive.”

The IONIQ Electric is available to order now from £30,950 either through visiting Hyundai UK’s COVID-safe dealership environments or through Hyundai’s digital Click to Buy platform.

The Click to Buy site offers customers ultimate flexibility and the greatest ever selection of available stock, with users able to research, configure, get a price for a trade-in and indeed buy a new car completely online – choosing from a number of national offers or bespoke offers from their local dealer.