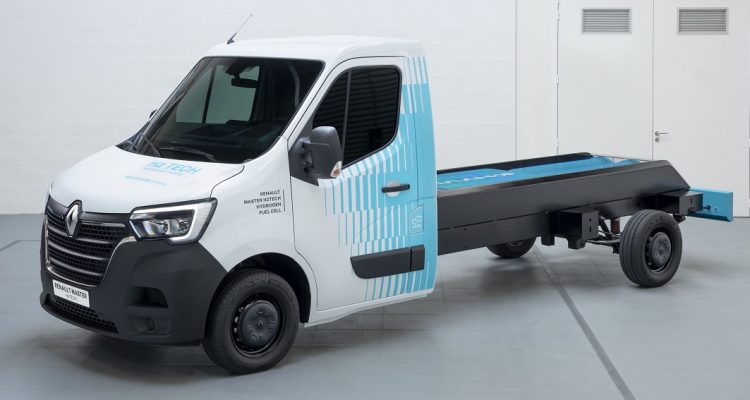 Both new versions offer zero CO2 emissions, increased range and a refuelling time of just five minutes. The first, revealed at Solutrans held at Eurexpo Lyon, France, is the Master Chassis Cab H2-TECH, while the second is the Master City Bus H2-TECH, presented for the first time at the Salon des Maires in Paris.

David Holserbach, HYVIA CEO says “HYVIA is moving fast. After less than six months of existence, we unveiled three Hydrogen Light Commercial Vehicles: a Van, a Chassis Cab and a City Bus. To meet different usages, for professional fleets or territories. We also revealed our Hydrogen Refuelling Station, to offer customer refuelling options where hydrogen infrastructure is still in development. HYVIA is about concrete solutions to be on track to meet the challenges of green hydrogen mobility and decarbonisation of transport.” 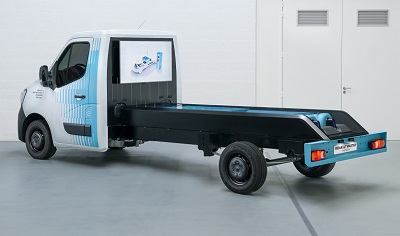 Renault Master Chassis Cab H2-TECH
The second vehicle from HYVIA is the Renault Master Chassis Cab H2-TECH, revealed at the Solutrans show held in Lyon, France between 16-20 November. Offering 155 miles of range, it is equipped with a 30kW fuel cell, 33kWh battery and two tanks containing 3kg of hydrogen (divided between two 1.5kg tanks) at 700 bars.

This vehicle offers a wide range of tailor-made conversion options to professionals, adapting to their needs – including the use as a box van with 19 cubic metres of cargo space volume. The first conversion to be released, the box van is perfectly adapted to carry goods and packages up to 1,000kg in payload.

The onboard experience of the Master Chassis Cab H2-TECH is enhanced by displaying the hydrogen flow and advanced powertrain system in action to the driver. 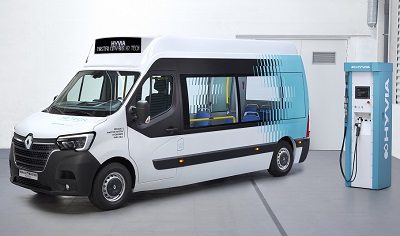 This enables a range of around 186 miles (300km) while carrying up to 15 passengers, with room for nine sitting and six standing. It is also capable of being wheelchair accessible to enhance its versatility and options for use.

The Master City Bus H2-TECH is the ideal solution for businesses, local use and public services needing to transport several passengers with ease.

Full HYVIA ecosystem to be deployed in 2022
In 2022, HYVIA will deploy its full hydrogen ecosystem of hydrogen fuel cell commercial vehicles, as well as its refuelling stations.

The Master City Bus H2-TECH will carry up to 15 passengers with a 186 miles range and rounds off the comprehensive HYVIA line-up for 2022.

In addition to the new products, HYVIA will also deploy its Hydrogen Refuelling Station. It maximises efficiency and availability of vehicles by refilling with petrol or diesel in just five minutes.

The HYVIA H2-TECH vehicles and technology are all made in France. The Renault Master is produced at the Batilly plant, while the electric and hydrogen integration is completed by PVI, a Renault Group subsidiary based in Gretz-Armainvilliers.

The electric motor is produced at Renault’s Cleon plant, while the fuel cell assembly and Hydrogen Refuelling Station will begin at the Flins plant, with more to come in the future.

* When driving, neither CO2 nor other regulated air pollutants, in accordance with the WLTP certification.