Vision to bring 3,000 hydrogen buses to the streets of the UK announced

Plans for a UK-built, 3,000-strong hydrogen bus fleet across the country, have been revealed by JCB heir Jo Bamford today, in a move he hopes can lead the nations’ economic recovery. 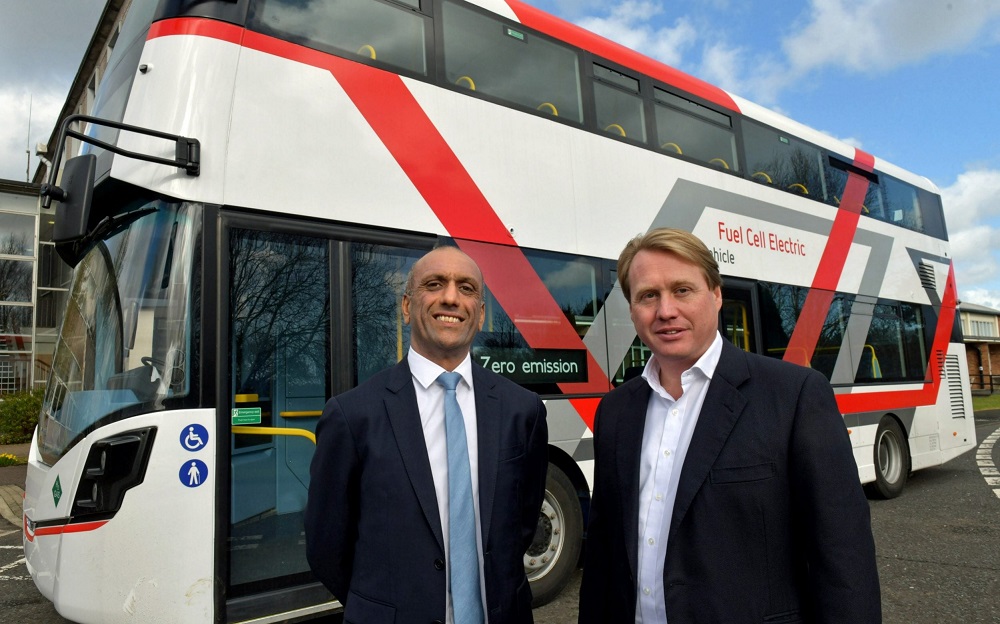 Mr Bamford claims his plans are “an ideal option for a Government that needs to boost UK manufacturing at this critical time whilst radically reducing our carbon emissions and air pollution”, and has already submitted his vision in a document to ministers.

Plans are being drawn up to introduce fleets of state-of-the-art buses – in which passengers benefit from USB charging points and more spacious seating – in places such as Aberdeen, London, Bimingham, Liverpool, Manchester, Brighton, Glasgow, Edinburgh and Belfast, with interest from relevant authorities.

He believes that an urgent introduction of hydrogen buses will lead to a knock-on transformation of other heavy duty vehicles, such as lorries, trains, ships and even ambulances and police cars. This would have the potential to create and sustain hundreds of thousands of skilled, green collar jobs across the country.

Greenhouse gases released from transportation account for a third of the UK’s total carbon emissions. Whilst battery powered vehicles are becoming a popular option for household cars, the lack of range and considerable weight make them practically impossible for heavy-duty forms of transport. There are also growing concerns about the mining practices used to find the materials for batteries, as well as what happens to them at the end of their life, with recycling rates lower than 5% in Europe and the US.

In Mr Bamford’s vision, 3,000 hydrogen buses – about 10% of the UK’s total fleet – could be silently moving around UK towns and cities by 2024. These vehicles will release only water vapour and save an estimated 280,000 tons of carbon dioxide each year, the equivalent of taking roughly 107,000 cars off the road a year.

Crucially, Bamford highlights, “the hydrogen used to power these vehicles will be completely green”. His company Ryse is in the process of building the UK’s first hydrogen production plant on the Kent coast. This will be powered by a near-by offshore wind farm and use electrolysis to produce hydrogen from water. Mr Bamford plans to build another four hydrogen production plants by 2025 to provide enough power for all 3,000 buses.

“Cities around the world are seeing massive reductions in air pollution as many vehicles have been kept off the road during the pandemic,” said Mr Bamford.

“However, the reality is that if we just go back to how public transport has traditionally been run, levels of pollution will quickly rise again to the same levels as before the crisis. We have an opportunity with hydrogen powered transport to make a huge difference to air quality, and for UK jobs as well. With increased orders on this scale I could increase the workforce at Wrightbus by nearly 700%.

“UK-made hydrogen buses are ready to hit the streets today. We already have hydrogen buses in London, and 20 of Wrightbus’ world-leading double deckers will be added to this later this year. We also have orders from Aberdeen, with many other areas becoming interested in our technology – in the UK and across the world”.

Hundreds of local authorities have declared climate emergencies, and local politicians are becoming increasingly interested in the potential of hydrogen to power local transport.

Darren Shirley, Chief Executive of Campaign for Better Transport, said: “The Government has the opportunity to ensure continued progress on improving air quality and reducing carbon emissions from rural as well as urban transport through fostering a hydrogen-fuelled heavy vehicle industry. As part of the National Bus Strategy, and through the UK’s Industrial Strategy, it should focus not just on battery electric, but the range of zero emission technologies that will benefit communities through cleaner air.

“It is clear that a range of technologies will be needed to take the UK’s transport system to net zero carbon emissions. Battery electric is not going to be viable for all uses, so buses fuelled by green hydrogen will be necessary to serve longer ranges and rural routes, and hydrogen lorries to move heavier loads over longer distances.”

The Government has recently committed a £5bn plan to boost local bus services, which a significant amount of this likely to be spent on replacing old diesel vehicles for modern, zero emission models.

Mr Bamford has set a clear challenge to the Government. “The UK missed the opportunity to become global leaders in battery technology, we must not repeat this mistake with hydrogen.”

“We are already leading the world by making hydrogen buses and boilers. We have a real opportunity to back a sector that will create jobs, economic growth and allow us to claim position as global leaders in hydrogen transport technology.

“With countries across the world also looking to drastically cut their carbon emissions, let’s build an industry that can sell zero carbon products, skills and innovation across the world. We can make significant progress on this in the next five years, but it must start with buses and it must start now”.

Mr Bamford has asked the Government to set aside £500m – 10% of the National Bus Strategy fund – to unlock the UK’s hydrogen industry. Roughly about £200m of this is needed to build the hydrogen production facilities and bespoke, zero emission transportation vehicles to take it to bus depots in city centres.

Another £300m is called for to subsidise the building of the buses to enable operators to purchase them for the same price as a current diesel one. Mr Bamford said “The Government gives the public a subsidy to buy an electric car, why shouldn’t a bus operator – who provides a vital service for the local community – be supported to buy a clean, green, UK-built hydrogen bus?”.