The South Korean automaker showcased its HDC-6 Neptune Concept Class 8 heavy-duty truck. The truck builds on the fuel cell work Hyundai has developed for its Tucson and Nexo passenger vehicles and signals where the company wants to go with green transport.

The automaker said the tractor-trailer combination demonstrates how it believes clean cargo transport will develop in the U.S. Fuel cells are an excellent technology for heavy-duty trucks because they can provide a longer driving range, higher payload and less refuelling time than a battery-electric long haul truck, Hyundai said.

But rival companies see a future in battery-electric trucks. Daimler Trucks North America is launching a demonstration project with electric Freightliner Cascadia models. Volvo Trucks North America has a similar program with its medium-range VNR model and said it would begin commercial production of the truck next year. Tesla also is developing a heavy-duty electric truck.

Other companies, including Kenworth, Toyota and Nikola Motor also are developing hydrogen fuel cell heavy-duty trucks for the U.S. market. A collaboration between Kenworth and Toyota is building 10 trucks for use in Southern California in a project funded partially by the state’s environmental regulatory agency. The first trucks will begin service later this year. Daimler also said it has long term plans for fuel cell truck commercialization.

One hitch to hydrogen vehicles is the lack of fuelling stations. Nikola plans to build its own network. Hyundai said it is interested in working with other companies to help develop a commercial vehicle hydrogen infrastructure in the U.S. 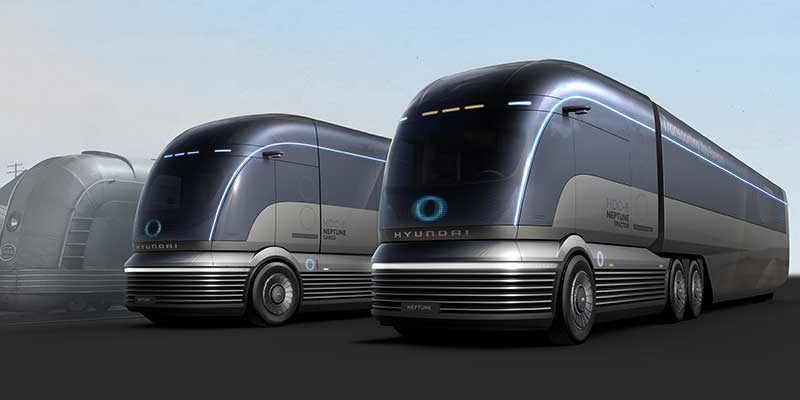 The Neptune Concept styling is inspired by the Art Deco streamliner railway trains that ran from 1936 until 1959. Just as those trains represented the top transport technology of the time, Hyundai believes its Neptune concept also represents a technological advance. But this truck is barely more than a mock-up. Hyundai did not say when it might be produced.

“The fuel cell powertrain gave us the opportunity to redefine the classical typology and architecture of the truck,” said Luc Donckerwolke, chief design officer of Hyundai Motor Group. “The Hyundai Commercial Vehicles Design Team started with a white sheet of paper focusing on the new defined functionality resetting all standards in order to project commercial vehicles in the future.”

But Hyundai also based the styling on function. The fuel cell stack – the component that creates electric power from hydrogen – requires significant cooling. The grille of the Neptune takes up nearly the entire front of the vehicle to provide airflow. The grill concept also integrates the retractable steps for aerodynamics. It doesn’t have door handles. Cameras replace side-view mirrors. The combination of both cab over the engine and conventional truck formats achieves packaging efficiency and improved ergonomics, Hyundai said.

There’s room for up to eight hydrogen tanks. For now, Hyundai doesn’t have a large enough fuel cell stack to pull an 80,000-pound load long haul. But the company said it is developing more powerful technology. That could take another five years, said Sae Hoon Kim, vice president of Hyundai’s fuel cell centre.

The cab has a flat floor and open concept to make a more relaxed environment for the driver.

Hyundai has other fuel cell trucks under development. It has a joint venture with H2 Energy to provide 1,600 heavy-duty fuel cell trucks for the Swiss market. The U.S. market is an important next phase of the company’s fuel cell strategy. 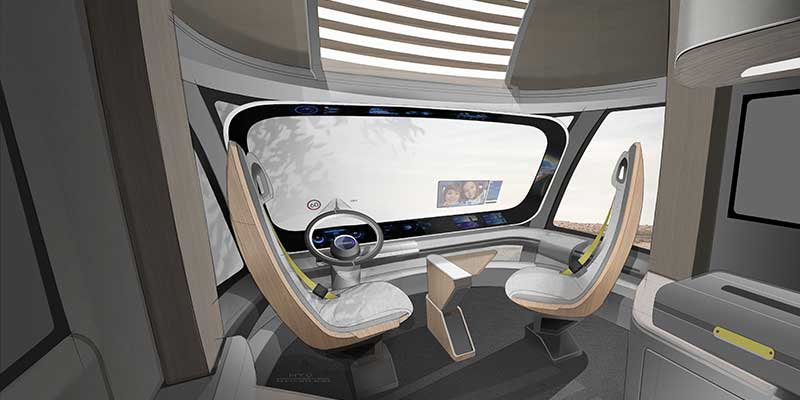 Hyundai also sees improvements in trailer technology that can reduce greenhouse gas emissions. It will be one of the first manufacturers in North America to introduce a cryogenic nitrogen refrigeration technology trailer system.

It developed the refrigerated trailer concept in collaboration with industrial gases producer Air Liquide. The trailer would produce a carbon footprint that is up to 90 percent less than a conventional unit.

It cools cargo more quickly than a traditional refrigeration unit and it offers precise control of target temperatures. The control system and independent cooling power maximize thermal efficiency. Outside temperatures won’t affect the trailer. And maximum power is always available, even when the truck’s engine is off or idling. The trailer also makes less noise than a conventional unit. That makes it useful for night-time deliveries in urban and suburban neighbourhoods where noise can be distracting, Hyundai said.