Frenni Transport has launched a campaign making high-quality protective masks for the local community during the Covid-19 crisis.

The Crymych-based company has so far raised more than £16,000 to fund the efforts. They have donated the equipment to local healthcare workers, pharmacies and shop staff. More than 12,000 masks have been manufactured and distributed by the company and a further 26,000 health shields have been delivered to local care homes. 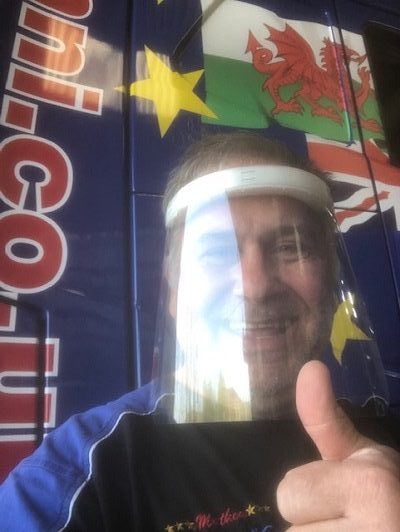 Mathew Parry, director of Frenni Transport said: “We have been overwhelmed by the response from the local community to support our campaign. As a company with more than 40 years of working in the local community, it was important that we did our bit to help protect those still at work in shops and pharmacies, serving the public. Members of the local community have volunteered their time to help make and pack the protective equipment to support local people on the front line”

“As a local transport company, we can see the pressure on our local health workers. We have delivered to the new Swansea Bay Hospital and to the Bluestone Resort along with the regular but larger deliveries to all of our main hospitals in South and West Wales. Recently, we have transported protective screens to Morriston Hospital in Swansea made by local businesses, to help protect healthcare workers and patients. Everyone is pulling together in this emergency situation and it is important that we all play our part too”

“We have been blown away with the support we have received. The original funding was seeded by Frenni Transport and Mansel Davies & Son. The local Fire Brigade team have helped pack along with other volunteers but the support that we have received from the public has been amazing. With a top up from local celebrity Rhod Gilbert we have managed to hit a £17,000 total this week through our GoFundMe account”