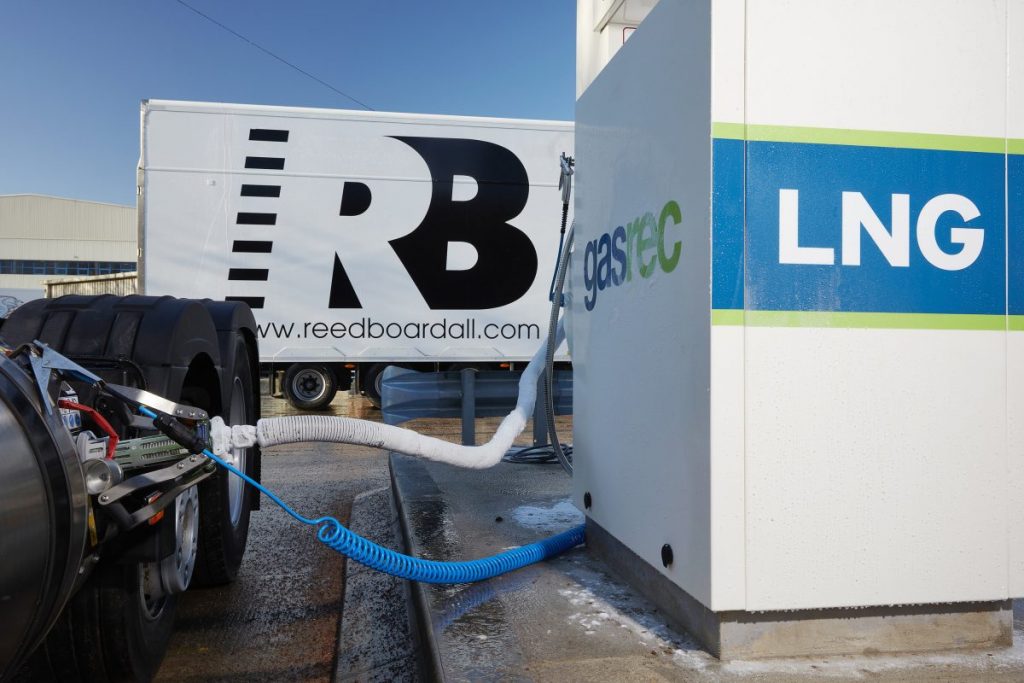 Owned and operated by Gasrec, the fully scalable, skid-mounted station has been designed by LIQAL and installed at the firm’s Boroughbridge headquarters to fuel an initial fleet of 30 Volvo FH LNG 6×2 tractor units.

The opening of the site is a major step in Reed Boardall’s strategy to transition its 220-strong fleet away from diesel.

Graeme Richardson, Managing Director, Reed Boardall Transport, says: “The government has set very stringent targets to reduce carbon emissions by 2030 and we are determined to play our part and meet those goals.

“We pride ourselves on being a forward-thinking, sustainable operation. Volvo’s LNG trucks are proven to vastly reduce CO2 emissions and we have been very impressed with the performance and reliability since first putting the trucks on the road in March 2020. Opening this site reaffirms our commitment to moving the fleet towards a cleaner, more environmentally-friendly fuel.”

Bio-LNG-powered trucks can return CO2 savings as high as 95 per cent, plus deliver an impressive 99 per cent reduction in particulate matter and 90 per cent in NO2 emissions compared to equivalent Euro VI diesel trucks. HGVs running on gas are also around 50 per cent quieter than their diesel equivalents.

Reed Boardall’s LNG fleet is predominantly working on fixed routes, delivering frozen foods to regional distribution centres. The FH LNGs offer a range of 470-480 miles per tank, comfortably enough for return journeys around north and central England without needing to stop and refuel. 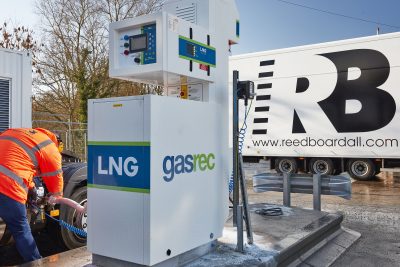 The next step is for a further station to be installed in Scotland later in the year to support a planned order for a further 40 new Volvo FH LNG tractor units.

“We’re working closely with the team at Gasrec and that collaborative approach will help us to greatly expand our LNG fleet over the next couple of years as the infrastructure allows. The trucks are working extremely well for us and we anticipate that by this summer we will have roughly a third of our fleet running on gas,” adds Richardson.

Reed Boardall’s LNG trucks each benefit from Volvo’s unique approach to gas engine technology, using small amounts of diesel to initiate ignition of the air-fuel mixture. This enables the Volvo G13C engine to deliver the same 460 hp and 2,300 Nm of torque as its diesel-only counterpart, with matching driveability, reliability and service intervals.

The new station at Boroughbridge – located just off the A1 and available to third parties by arrangement – was designed by Dutch LNG expert LIQAL. The compact, prefabricated system requires limited construction time on site and supplies the same fuelling consistency and reliability as a fully-fledged bio-LNG fuelling station.

LIQAL’s Business Development Manager Joost Jansen, says: “We’re very excited to be taking our first steps into the UK market and delighted that Gasrec, the UK market leader in bio-LNG transport fuel, acknowledges the benefits of our station design and integrated project approach.”

Commenting on the refuelling station, James Westcott, Chief Commercial Officer of Gasrec, explains: “We chose to work with LIQAL on this project because we saw great synergy in our ambition and commitment to innovation. This station is an ideal solution for Reed Boardall, being capable of comfortably supporting its 30 gas vehicles, with the scalability to grow as the business puts more gas trucks into service.

“We are looking forward to adding further infrastructure for the company to help them in their plans to make the move to a cleaner, safer and cheaper fuel.”

Reed Boardall is one of the largest temperature-controlled food distribution businesses in the UK, storing and delivering frozen food from manufacturers across Britain, Europe and further afield to all the UK’s best-known supermarkets.