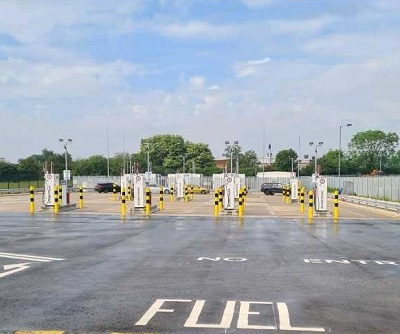 The announcement comes as the UK government sets out plans to ban the sale of new petrol and diesel HGVs from 2040 under its transport decarbonisation plan.

The new station in Newark is the first to serve the North East region and is capable of refuelling up to 500 vehicles per day, making it one of the biggest stations in the UK and cutting between 100,000-120,000 tonnes of greenhouse gas (GHG) emissions each year, when the station is fully utilised. Most of the UK is already within a 300-mile round trip of a CNG Fuels renewable biomethane refuelling station and the new site will put Lincoln and Sheffield within its range and serve local and passing fleets using the A1 north and south.

The many major distribution centres in and around the region will now also have easy access to low-carbon biomethane for the first time, supporting existing customers and new local fleet operators. Renewable biomethane is the lowest carbon, most cost-effective alternative fuel to diesel for HGVs, cutting emissions by 85-90%, while being 45% cheaper than diesel.

Philip Fjeld, CEO of CNG Fuels, said: “Fleets around the country can already make the switch to cleaner and cheaper fuel by adopting biomethane, and our growing network of refuelling stations is making biomethane more accessible than ever before. Our new station in Newark will allow fleets in the region to support the local decarbonisation agenda and significantly cut both emissions and costs ahead of the UK’s net zero target.”

Yorkshire-based logistics company, Campeys of Selby, is one of the many organisations within the region to benefit from the new biomethane refuelling station. The company is taking delivery of 11 CNG trucks as part of their move towards low carbon transport. 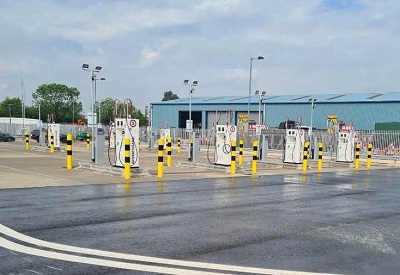 Harry Campey, Transport Manager of Campeys of Selby, said: “Switching from diesel to biomethane was a no-brainer for us – we’re dramatically reducing the environmental impact of our fleet and saving thousands of pounds in fuel costs in the process. CNG-Fuels’ station in Newark opens the door for even greater adoption in the region, as we continue to work towards hitting our local and national net zero targets.”

HGVs account for 4.2% of UK carbon emissions, making the sector a key area of focus for decarbonisation targets around the country. As a result, demand for renewable biomethane is growing at a rate of 100% per annum, with CNG Fuels forecasting that this growth will continue to accelerate. The company expects almost 20% of the UK’s high-mileage HGV fleet will be running on Bio-CNG by 2025.

The Newark station is the latest in CNG Fuels’ strategic network of refuelling stations that covers the length and breadth of the country. The company already operates six stations across the UK and plans to open a further 12-14 stations by the end of 2022. The network will support the burgeoning sector as the number of trucks running on Bio-CNG increases five-fold within the next five years.

CNG Fuels is currently securing supplies of biomethane derived from manure to create a fuel that will be net zero emissions on a well-to-wheel basis. It expects to begin offering carbon neutral biomethane across all sites from next year at the same price as the renewable biomethane fuel it currently supplies.

Manure gives off methane, a greenhouse gas 28 times more powerful than carbon dioxide*. Using methane as an HGV fuel prevents it from going into the atmosphere and reduces overall emissions. The EU’s revised Renewable Energy Directive (RED II) recognises biomethane from manure as a carbon negative fuel,** and the UK is expected to adopt the same rules in 2022.

CNG Fuels’ strategic network of refuelling stations is also ideally placed to support battery electric and low-carbon hydrogen powered HGVs in the future and the company is consulting on how its stations can best accommodate these technologies when they become commercially viable. The Committee on Climate Change expects battery electric or hydrogen-powered HGVs to play a major role in decarbonising freight transport from 2030 onwards.

* The global warming potential of methane is 28-36 times greater than CO2 over 100 years – US Environmental Protection Agency.

** 103 grammes of CO2 are saved for each megajoule of energy generated by biomethane derived from manure, if methane is not allowed to escape in the process. Renewable Energy Directive II, p118.