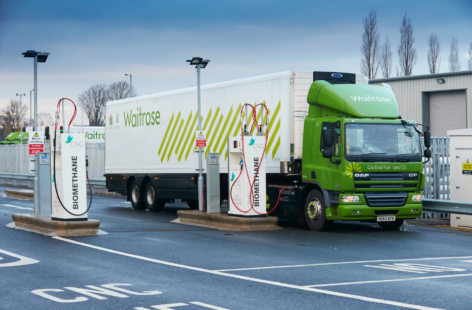 The new public access Bio-CNG stations will serve major truck routes and cities, and will be able to refuel up to 3000 HGVs a day, a near 500% increase on capacity at the company’s existing stations at Leyland, Lancashire and Crewe, Cheshire, which can refuel more than 600 vehicles daily.

100% of the fuel supplied by CNG Fuels is renewable and sustainable biomethane approved under the Department for Transport’s Renewable Transport Fuel Obligation (RTFO) scheme. The gas is sourced from waste feedstocks such as food waste and is the most environmentally friendly and cost-effective alternative to diesel for HGVs. It cuts vehicle greenhouse gas (GHG) emissions by up to 85% and is 35%-40% cheaper than diesel.

Construction work on a station in Warrington, at Omega South on the M62, has begun. It is expected to be the largest public access gas refuelling station in Europe, catering to several major hauliers based in the area. It will be able to refuel up to 800 HGVs a day and serve 12 vehicles simultaneously.

CNG Fuels has also commenced construction at Erdington, close to the M6 in Birmingham. The station will be able to refuel more than 600 HGVs a day, and will be built on land belonging to Cadent, operators of Britain’s biggest gas distribution network, at its National Distribution Centre in Gravelly Way Industrial Park. Cadent, with whom CNG Fuels have collaborated previously on Leyland CNG station, have committed to convert their entire fleet from diesel to CNG. 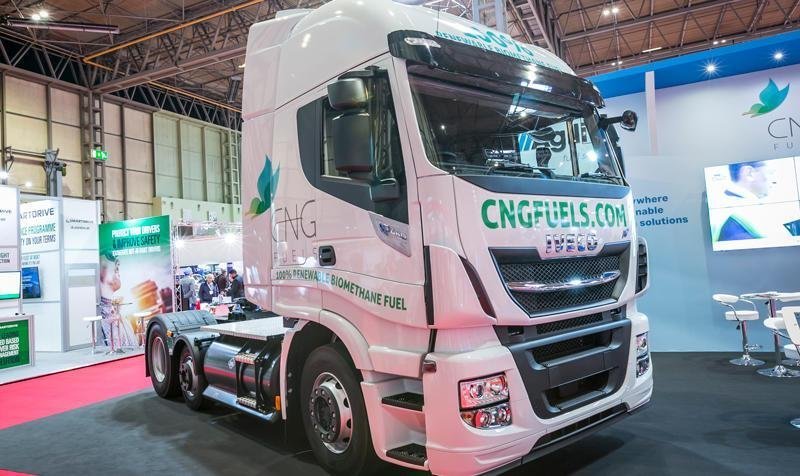 These stations have been supported by Ingenious, an investment manager specialising in the infrastructure, real estate and media sectors. They are due to open in the autumn together with a third, previously announced station at the Red Lion Truckstop off the M1 at Northampton, which will be able to refuel more than 350 HGVs a day. The Northampton station is part of the UK’s first large-scale study of how renewable and sustainable biomethane can help slash road transport emissions, supported by the Office for Low Emissions Vehicles (OLEV) in partnership with Innovate UK.

Philip Fjeld, CEO of CNG Fuels, said: “The spotlight on climate change continues to grow in intensity and the UK haulage sector has for many years been a laggard when it comes to reducing greenhouse gas emissions. Renewable and sustainable biomethane allows companies to achieve deep cuts to greenhouse gas emissions, cut pollution and save money – no wonder demand is soaring. Our customers are already planning to order hundreds of new biomethane fuelled trucks in 2019 and we have interest from companies which run a third of the UK’s HGVs.

“We’re making it easier for fleet operators to make the switch from diesel by developing a nationwide network of public access biomethane stations on major trucking routes and at key logistics hubs.”

Demand for CNG Fuels’ renewable and sustainable Bio-CNG fuel increased by more than 300% in 2018. CNG Fuels estimates that in 2019, Bio-CNG supplied by the company will reduce UK haulage GHG emissions by more than 35,000 tons, with a multiple of this expected for 2020. The John Lewis Partnership already has more than 50 gas trucks and plans to run its entire 500-strong delivery fleet on gas by 2028, while parcel company Hermes also plans to replace its 200-strong fleet of diesel trucks. Other customers adopting biomethane include ASDA, Argos, Royal Mail, DHL and Cadent.

The company has also launched a new Bio-CNG tractor unit, which will allow trucks carrying loads of up to 44 tonnes to benefit from renewable and sustainable biomethane. The 6×2 unit has been developed in collaboration with Iveco and Agility Fuel Solutions. As a well-established OEM manufactured technology with proven benefits, Bio-CNG is well placed for mass adoption.

CNG Fuels expects to start construction on two more public access stations in the autumn, at Larkhall in Scotland and Knowsley, near Liverpool, and plans to add a further eight in 2020, making renewable and sustainable biomethane fuel available throughout the UK, from Scotland to the south-west. It is also developing the portfolio with support from investment company Ingenious.

The government reinforced their support for biomethane as an alternative fuel in the last budget by extending the fuel duty differential between natural gas and diesel from 2024 to 2032. Element Energy forecasts the UK will have 10,000 HGVs and buses running on natural gas by 2020 and 60,000 by 2030.