The UK has the lowest percentage of female engineers in Europe*, but on this year’s International Women in Engineering Day, two females from one of the UK’s largest bus operators are calling for more girls to consider a role in engineering. 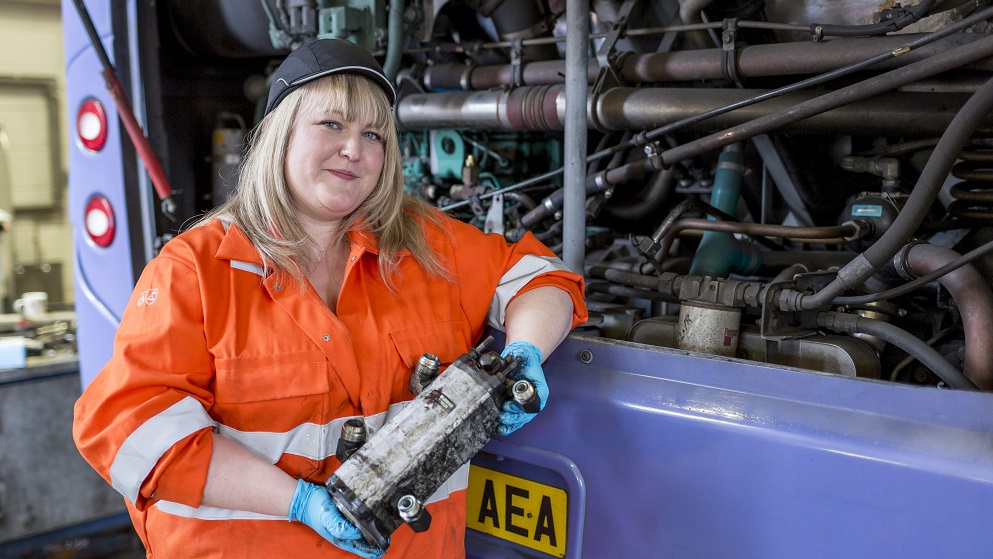 There’s no escaping the fact that men outnumber women in the bus driving world, but more and more women are proving it’s a job they’re great at – and that bus driving or engineering is a career that suits them. A recent survey conducted by First Bus found that a quarter of women have actively avoided careers because they are perceived as ‘men only’, but two female engineers at First Bus are proving there are no barriers preventing women from working within the bus industry.

​International Women in Engineering Day is an international awareness campaign to raise the profile of women in engineering and focuses attention on the amazing career opportunities available to girls in this exciting industry.

Why did you decide to start a career in engineering?

M: I’d tried a few office jobs, but I found it boring! I then got an apprenticeship in a car garage as I’ve always enjoyed making and building things and I loved it. I then saw an advert to join First Bus through the apprenticeship scheme and applied.

K: I always wanted to learn a trade and started to look for apprenticeships that would give me that opportunity, but when I was 20, I struggled to find an apprenticeship scheme that would take on an “older” person, so I started applying for other jobs. In 2014 I joined First Bus as a driver and progressed to become a supervisor and then saw the opportunity to apply for the engineering apprenticeship and I was offered a place to join the scheme in 2018.

What do you do day-to-day?

M: I’m currently repairing a vehicle that suffered damage alongside one side, so this involves replacing all the panels and brackets, which is a BIG job! My days can vary, but generally they can involve repairing body damage, seating, flooring – essentially anything that could be dangerous for a customer.

K: Wheel changes, brake discs and pads, starter motors; every day is different. I’ve just started working on electricals and every six weeks we go to college. I’m the only girl on the course, but all the guys treat me the same as everyone else.

Are there other female engineers in your depot?

M: There’s one other female mechanic in my depot, but she’s moved into a supervisory role, so I don’t work with her day-to-day. It doesn’t bother me though, it’s not awkward being the only female, as all the guys are friendly.

K: I’m the only female at my depot and on my apprenticeship course. The guys I work with are all a bit older than me, but they’ve never shown any issue with me being part of the team. If you show willing and want to learn, then they’ll teach you. My Manager Ben is a huge inspiration and he’s keen to encourage more women to join engineering and make it more of the “norm”.

What do you think the opportunities are like for female engineers?

M: I would love to continue to progress in my career as an engineer and I have a great role model in the business who has progressed to become a supervisor. Last year I was lucky enough to win the Level 2 IRTE Skills Challenge, which was a huge achievement.

K: My aim is to continue to progress. I feel like I have as much opportunity as anyone else.

Where do you see yourself in 10 years’ time?

M: I want to be doing exactly what I’m doing now and then perhaps in 15 years’ time, I will be starting to work my way up the ladder!

K: In 10 years’ time I’d like to have worked my way up the ladder to be an Engineering Manager if not higher by then.

What would you say to a younger version of yourself?

M: I’d tell myself to get started sooner, as I’d be a fully qualified engineer by now, but I’m grateful for the experience I’ve learnt on the way to becoming an apprentice.

K: If I’d started it earlier then I wouldn’t have the experience and knowledge that I have now, but I’d tell myself not to give up on it & it’s never too late.

Michelle and Kelly are both apprentices on the First Bus Apprenticeship Scheme. For more information on the careers available visit https://uk.firstgroupcareers.com/