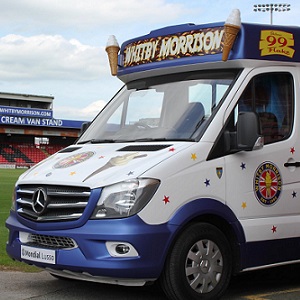 Legendary ice cream van makers, Whitby Morrison, will give visitors to the Confused.com London Motor Show 2018 something to savour as it unveils its latest model on the ‘Built In Britain’ feature.

Ahead of the summer season, the family-run British manufacturer will launch its 2018 van, based on the Mercedes-Benz Sprinter 314 SWB, which is hand-built in Britain and distributed across the world.

Famous for producing bespoke ice cream vans for the global market, Whitby Morrison has provided the vehicles that drive smiles on faces in streets across the world since 1962, from its purpose-built facility in Cheshire.

Following the footsteps carved by its founder, Bryan Whitby, today’s business is now in its third generation of management. Visitors to this year’s show will be able to climb inside and pretend to create their very own Mr Whippy which is sure to serve up some fun for all the family.

Alec Mumford, Chairman of The Confused.com London Motor Show, said: “Everyone attending the show this year will doubtless recall the sound of an ice cream van approaching – it is a national treasure in its own right. We are overjoyed to be able to welcome Whitby Morrison to this year’s show and on our ‘Built In Britain’ feature, we’re sure it will whip up a storm!”

Tickets start at just £18.50 and one child (under 17) goes free with a paying adult. They’re on general sale now and available to purchase at: www.thelondonmotorshow.co.uk