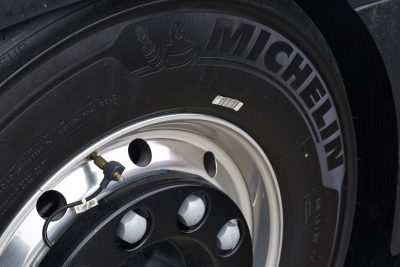 Martin Tomlinson, Head of Media, Truck Demonstration & Driver Development at Volvo Trucks UK & Ireland, says: “In the minds of most customers, fuel is everything. We’ve pioneered world-leading technologies and fuel saving strategies that can make a huge difference to a fleet’s bottom line, but you also need the right tyres to help squeeze the most out of every drop.

“Michelin X Line Energy tyres have become my default choice for our long-haul demo fleet as they help us to drive further on less fuel. Plus they match this with impressive safety, handling and durability.”

Chris Smith, Managing Director of Michelin UK, says: “Manufacturers such as Volvo Trucks hold a wealth of data on vehicle performance in different configurations, so it’s a huge compliment to see our tyres being repeatedly chosen for their demonstration fleet.”

Michelin X Line Energy tyres are designed specifically for trucks and coaches used on long-distance routes, and where the majority of time is spent travelling at sustained high average speeds. They are the product of Michelin’s continued investment of more than €600m in research and development every year, which has helped to push the limits of rolling resistance even further and unlock greater sustainability benefits for customers.

The test took place using a standard tri-axle curtainside trailer, supplied by Dawsongroup. It ran over a set route which runs from Nuneaton up the M6, crossing the country close to the border with Scotland on local roads, before returning south on the M1. The route covers 494km of motorway, 121km of severe gradients and 145km of trunk roads.

The Volvo FM broke Commercial Motor’s previous 40-tonne record of 8.6mpg, set in 2008, despite today’s speed limits allowing the overall average speed to rise from 69.6kph to 74.9kph, while emissions have also improved from Euro-5 to the latest Euro-6 Step D standard. The Volvo FH with I-Save beat the previous 44-tonne record of 8.65mpg, which had been set in 2017.