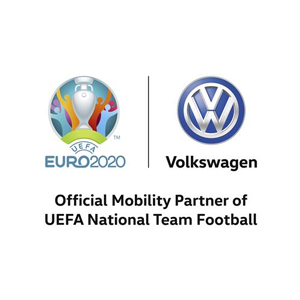 Volkswagen becomes a new partner of UEFA, the Union of European Football Associations, starting in 2018, and is thus continuing its long-standing football tradition.

Under a four-year contract as “Official Mobility Partner of UEFA National Team Football”, the company will also be supporting the UEFA 2020 European Football Championship, which is taking place in 13 countries for the first time to mark the 60th anniversary of the competition.

This engagement in the world’s most popular sport will mainly serve as a communication platform for the market launch of the I. D., which will be the face of Volkswagen’s new e-mobility family from 2020 onward.

Dr. Herbert Diess, CEO of the Volkswagen brand, commented: “No other sport is as powerful as football or unites so many people. Furthermore, the 2020 UEFA European Football Championship played across the entire continent is a fantastic project. Our wish is to contribute towards building bridges between all countries and for football fans with our mobility and creativity.”

Volkswagen is at home on roads from the Atlantic to the Urals, between Spitzbergen and Sicily. Just under 1.7 million vehicles were delivered to customers in Europe last year. Passenger cars bearing the round VW emblem are available in all of UEFA’s 55 member countries. The automotive brand also operates 21 production plants with around 150,000 employees in seven countries on the continent.

Guy-Laurent Epstein, Marketing Director of UEFA, is looking forward to the partnership with Volkswagen: “We are proud to have such a great European brand with such a genuine passion for football at our side. That holds especially true given the tasks that lie ahead of us: UEFA EURO 2020™ will place the most rigorous demands on mobility. There is a grand idea and an innovative concept behind this tournament and we are very happy to have the support of Volkswagen on this exciting journey.”

Expanding the commitment to football is designed to support the company’s strategy for the future. “Football and Volkswagen are the ideal match. Football is played in almost every country and is inclusive – just like our cars. So the sport offers us the perfect opportunity to present our new orientation. In footballing terms, Volkswagen will be playing an attacking game over the coming years. After all, we are rolling out the biggest offensive in the history of our company in terms of models as well as e-mobility”, said Herbert Diess.

Volkswagen’s engagement extends to other top-calibre football competitions as well as UEFA EURO 2020™. The partnership with UEFA also includes the UEFA Women’s EURO, UEFA Under 21 Championships, Futsal EURO, and the final tournament of the newly-created UEFA Nations League, which will make its debut in 2019. Volkswagen will also be entitled to use various rights in respect of the qualifiers for UEFA EURO 2020™. As UEFA’s “Official Mobility Partner of UEFA National Team Football” Volkswagen will enjoy an extensive package of rights, including advertising and promotional rights, digital rights, tickets, and hospitality options. In total, some 500 matches will be played during the term of the contract.

Jürgen Stackmann, Volkswagen Brand Board Member for Sales, commented: “We are striking out in a new direction with the sponsorship of UEFA National Team Football, which fits in well with the start of I. D. sales: to mark the launch of our new generation of highly-innovative electric vehicles, the Volkswagen brand is for the first time building on an international communication platform in football that will generate positive interest not only throughout Europe, but also further afield. We are hugely excited!” UEFA EURO 2020™ in particular brings great opportunities for Volkswagen. As Stackmann explained: “We will of course be involving all European markets as well as our approx. 3,000 dealers across the European continent. The spotlight, though, is firmly fixed on football fans and thus on our customers. We want to present attractive mobility solutions to them.”