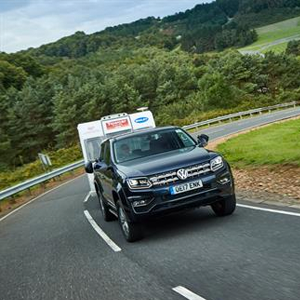 Volkswagen Commercial Vehicles’ Amarok has been named winner of the pick-up category at the 2018 Caravan and Motorhome Club Towcar of the Year 2018 awards.

Now in its 35th year, the Towcar of the Year competition saw 44 cars from 20 manufacturers put through their paces during a series of rigorous tests at the Millbrook Proving Ground near Bedford to assess the vehicles’ ability to perform in all aspects of touring.

Commenting on the Amarok’s performance the Towcar of the Year judges said: “Nudging £40K, the Amarok is a serious investment, but in return for your money you get a rugged, muscular utility vehicle that is anything but rough and ready. Pick-ups sometimes fall down on their handling, but not this one; the Volkswagen surprised all the judges at just how well it dealt with the hill route. Stability was excellent and its load-carrying capacity is to be envied.”

This is the second towing award the Amarok has claimed this year: it was also named Best Pick-Up at the Tow Car Awards 2017 in June.

Head of Marketing for Volkswagen Commercial Vehicles, Sarah Cox, said: “I’m delighted that the Amarok has added another award to its trophy cabinet, and by such a respected organisation as the Caravan and Motorhome Club. Once again its unique combination of off-road capability with on-road manners, comfort and technology has been recognised as class-leading.”

The latest version of the Amarok went on sale in the UK in December 2016. It now has a refreshed external look, a new 3.0-litre V6 TDI engine (making it the only six-cylinder model currently on sale in the segment), an all-new interior and the latest in in-car infotainment systems and technology. As well as the winning model here – the range-topping 224 PS engine with eight-speed auto gearbox in Highline trim – other versions are available. A 204 PS automatic is also offered, with a manual 204 PS to follow shortly, and a 163 PS manual later in the year.