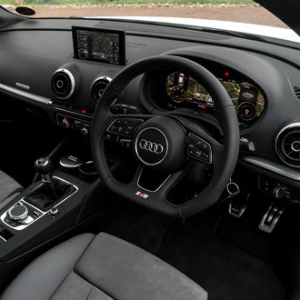 The pin-sharp graphics, rich array of on-board driving data and split-second response rates of the all-digital Audi virtual cockpit have earned it the coveted title of ‘Tech of the Year’ in the inaugural Car Tech Awards, adjudicated collaboratively by a panel of automotive and tech journalists from leading digital brands, Carbuyer and Alphr.

First introduced on the Audi TT in 2014, the highly functional Audi virtual cockpit is now an established feature of the premium brand’s interior architecture, extending to more than half of the model range from the spine-tingling R8 to the newly introduced Q2 compact SUV. It also can be specified across the new Audi A3 range, which has been separately praised in two more Car Tech Awards categories for its switched-on approach to user friendly tech and connectivity in the under £25,000 bracket.

Editor of CarBuyer, Stuart Milne explained the rationale behind the win: “We were endlessly impressed with virtual cockpit, and the more you use it, the better it gets. Its performance is outstanding, graphics are crisp and when the 12.3in screen is given over to navigation functions, mapping has never been clearer. With all this in mind, virtual cockpit is a must have feature across most of Audi’s models.”

“If there’s one piece of in-car technology that defines 2016, and will lead the way over the coming years, it’s Audi virtual cockpit.”

The Audi virtual cockpit comprises a TFT display with a 12.3-inch diagonal and a resolution of 1440 x 540 pixels. It displays exceptionally sharp and highly detailed graphics. Working in the background for the cockpit is a high-performance Tegra 30 processor supplied by Audi’s partner NVIDIA. The fully digital display enables a wide range of information to be presented clearly and directly in the driver’s field of view. This includes the classic values for speed and rpm, but also navigation, communication and entertainment information.

The driver can switch between two views by pressing a button on the steering wheel. In Infotainment mode, a central window dominates the view. It offers plenty of room for lists in the Phone, Radio and Media areas or for the navigation map that can furnish practically the entire screen when desired. The tachometer and speedometer are displayed as small dial instruments on the right and left. In a second, classic view, they appear about as large as analogue instruments, and the middle window is smaller. For the Audi S and RS models as well as for the Audi R8, there is a third screen with a dynamic emphasis. It is dominated by the tachometer and provides additional technical information.

The driver operates the Audi virtual cockpit from the multifunction steering wheel. Using switches on the left spoke, the driver pages through the menus for the on-board computer, audio system, and – depending on the installed features – the phone and navigation system. Located on the right side of the steering wheel are the volume control, the voice control button, telephone express controls and the skip function for quickly changing the radio station or song.

In keeping with its MMI logic, Audi modifies the colour scheme of the display according to the base menu being used – orange for the Media menu and green for the Phone menu, for instance. At the lower edge are permanent displays of outside temperature, time of day and odometer readings as well as warning and information symbols. 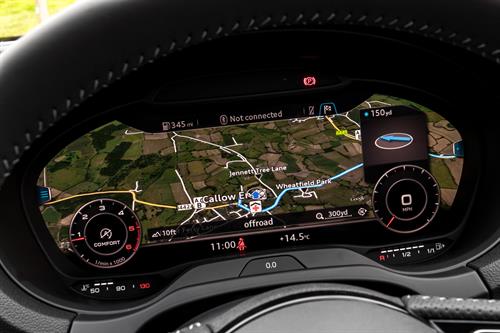 The latest Audi A3 range encapsulates Vorsprung durch Technik with a host of standard and optional equipment at the forefront of in-car infotainment and connectivity. Connecting an iPhone or Android handset seamlessly to the car is now instantaneous thanks to the standard Audi smartphone interface, and for all SE Technik models upwards, SD-card based MMI navigation is supplemented with a three-month free trial of the  comprehensive Audi connect infotainment portfolio. This opens up a wealth of information accessible directly from the MMI screen, covering news, weather and travel updates, Twitter integration, Google Earth and Street View and useful information such as a fuel station price checker.

The audio-visual experience can be enhanced even further with options such as the wireless charging facility of Audi Phone Box, MMI Navigation Plus with MMI Touch and a high-performance Bang & Olufsen sound system.