Vauxhall Insignia Drives From Switzerland To The North Sea (And Back) On One Tank Of Fuel! 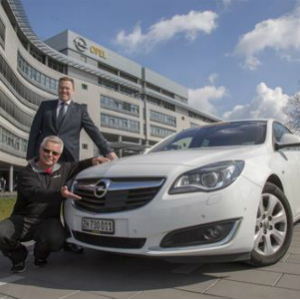 The Vauxhall Insignia has proven itself to be an exceptionally frugal option in its segment, having achieved over 1,300 miles on a single tank of fuel.

The 1.6 CDTi ‘Whisper Diesel’ 136PS ecoFLEX manual model with Start/Stop was driven from the Alps in Switzerland to the North Sea and back again, clocking up 1,311 miles in total.

While the model’s official combined fuel economy is listed as 74.3mpg or 72.4mpg (for hatchback, figures are dependent on trim level), independent hypermiler Felix Egolf recorded an impressive average fuel economy of 82mpg over the entirety of the trip, which included city and motorway driving in typical European traffic conditions. As a hypermiler, the former Airbus pilot seeks to establish new minimum fuel consumption values and surpass official economy figures.

Egolf’s tour started in Lucerne, Switzerland on 6 April. From there, he travelled to the Opel/Vauxhall headquarters in Rüsselsheim via the Black Forest. In Rüsselsheim, he stopped to discuss the Insignia’s progress with Christian Müller, Vice President GM Global Propulsion Systems – Europe.

“The fuel gauge in the Insignia showed that the tank was still almost full when Felix Egolf arrived in Rüsselsheim,” said Müller. “He managed to complete the first 266 miles with an average consumption of about 88mpg. It’s great that he managed to cover over 1,300-miles without having to refuel.”

The journey then took Egolf to Münster in North-West Germany and up to Cuxhaven on the North Sea coast. The return leg saw him pass Hanover, Kassel and St. Gallen before coming to a successful end in Zurich on 8 April.

“I have wanted to crack the 2,000-kilometre milestone for some time now but I couldn’t find the car to do it. The excellent aerodynamics of the Insignia combined with the Eco Contact 5 low-rolling resistance tyres contributed to this outstanding result,” said Felix Egolf. “This hypermiling tour with the Insignia also shows that anybody can easily equal or better official consumption figures by using foresight when driving and pre-empting the situation ahead.”

The Vauxhall Insignia is not all about great fuel economy though, also giving the driver strong performance, a smooth ride and exemplary safety equipment. The 1.6 CDTi ecoFLEX engine with (136PS) has maximum torque of 320Nm at the low, fuel-saving range of 2,000 to 2,250rpm, providing the driver with sufficient levels of power while remaining efficient.