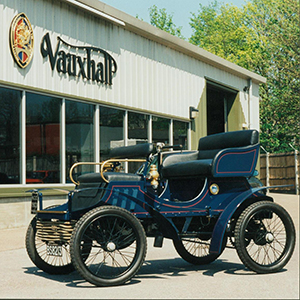 By reviving the ‘Viva’ name for its latest supermini, Vauxhall is proving it is in touch with its past.

But Vauxhall’s long and illustrious history goes back much further than the 1960s. In fact, the very first Vauxhall car was built in 1903 in Vauxhall, south London ­after which the company moved to Luton (still its UK home) in 1905.

Today, part of the Luton site is given over to Vauxhall’s own Heritage Centre where many significant cars from its past are housed.

One of the most important is a 1904 6hp single-cylinder two-seater, but this is no dusty museum piece. It is used regularly and is an early entry for the 2015 Bonhams London to Brighton Veteran Car Run. The car has taken part in the world’s longest-running motoring event 53 times, with one of the earliest in 1927, driven by Vauxhall’s MD, Percy Kidner (it wore a different reg number then). Hopefully this year the 6hp will be joined by its 1903 5hp sister following some major mechanical restoration. The 5hp has completed nine runs in Vauxhall’s 20-year ownership.

But Vauxhall’s involvement with the Run, which takes place on Sunday 1 November, goes beyond coaxing the 111-year-old and 112-year-old veterans to Brighton. A long-term supporter of the event, the company is joining fellow pioneering carmaker Renault (est. 1898) in becoming a Manufacturer Patron of the Run.

Denis Chick, Vauxhall Communications Director, said: “Vauxhall has been a regular in the run since the 1950s with either and sometimes both of our veterans. This year is particularly poignant as Vauxhall celebrates 110 years of vehicle production at its Luton plant and 90 years of ownership by General Motors. We look forward to sampling the sea air yet again in 2015!”

The advance entry fee for this year’s Run ends on Friday 31 July after which the late entry fee will apply. Anyone thinking about entering is encouraged to do so before this deadline to take advantage of savings. More information on the Run can be found at www.veterancarrun.com

The Bonhams London to Brighton Veteran Car Run is the pinnacle event in a week of motoring nostalgia in the capital during “London Motor Week” – a series of events hosted by the world famous Royal Automobile Club which also includes a Literary Festival, Motoring Forum, and the Regent Street Motor Show.