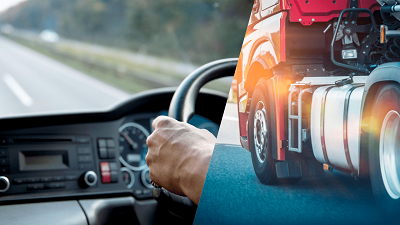 The union warns that the threat of industrial action is growing as a result.

Unite accused employers and government of doing nothing to deal with what it called “a brazen lack of respect” towards drivers as they tried to squeeze “the last drop of profit” from their contracts.

The union proposes a six-point plan to alleviate the crisis, which includes improved pay and conditions; tackling the lack of diversity in the industry; simplifying driving hours rules; making better parking and facilities a priority; toughening up sanctions for employers denying drivers access to basic facilities; and shifting the cost of accreditation from drivers to employers.

“It is becoming clearer by the day that we are facing a serious HGV driver shortage across the UK – ‘a perfect storm’ in the worst possible way. Already gaps are appearing on supermarket shelves, and logistics and hauliers’ organisations are warning August will be a pinch point regarding the shortage of drivers as workers take summer breaks,” Adrian Jones, national officer for road transport, Unite, said: “The current shortage of an estimated 100,000 HGV drivers in the UK has highlighted a number of long-running serious discontents in the industry, from poor pay and conditions to inadequate toilet provision and lack of parking facilities.

“It is clear that the UK’s HGV drivers have been taken for granted for too long by bosses keen to squeeze the last drop of profit from their contracts – this brazen lack of respect for the workforce is now coming home to roost with mounting calls for industrial action, Jones said.

“We have been campaigning for some considerable time to have a constructive dialogue with ministers and the employers to get to the root of the problems afflicting the industry. Unfortunately, the government has allowed this situation to drift and has shown a lack of energy in getting to grips with the unfolding situation. Unite has been banging its head against the wall.”

Perishable Movements supports Unites plan. The company said: “The current HGV driver crisis is something that PML predicted some time ago and we wholeheartedly agree with Unite that urgent action needs to be taken.

“However, at PML we are not relying on the government to take steps to address this acute issue. We are already working on specific plans to provide drivers – whose pivotal role in maintaining the supply of food and other critical supplies during the pandemic has largely gone unnoticed – with the practical support which we believe they are naturally entitled to.

“PML has always put driver safety and welfare at the top of its agenda. We will be sharing news of our various planned initiatives in the very near future.