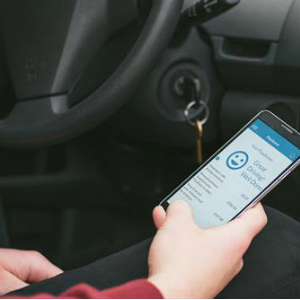 A unique new black box policy has been launched that gives motorists daily updates of their next renewal premium based on the quality of their driving.

Aimed at young drivers, the FluxScore policy’s daily updates via an app show how the previous day’s driving has affected their renewal premium – and shows how cheap their premium could be if they drive well.

Early adopters of the telematics policy, launched by specialist young driver insurance broker Adrian Flux, say the target premium and daily incentives to save hundreds of pounds off their renewal have quickly improved their driving.

Jordan Markwell, a student from Norfolk, was one of the first to sign up to help trial the new policy during its development.

“I found the app to be incredibly useful,” he said. “It doesn’t nag or restrict you if your driving slips, but does inform you that it might rise in price. I think this gives you an incentive to keep driving well, and to try to improve each day and make up for any mistakes.

“Each morning the app sends a push notification to let you know about how yesterday’s driving affected your premium, and after a while I found that my insurance had become almost like a game, competing with myself to keep my scores down and to save more money each day.”

Drivers are notified that poor driving, such as breaking speed limits, will increase their renewal premium, while still giving them a target to aim at for good driving.

Poor driving triggers a warning and an email showing a map where the incident happened, with drivers who accrue more than three warnings having their policy suspended.

“The combination of a points system to reward good drivers, and an alert system in the app to warn drivers of their mistakes, has not only seen the majority of policyholders’ premiums drop, but many people come to us to say that it has helped improve their driving,” he added.

“Our data shows that even the 20 worst drivers on our books, those who regularly received bad scores and alerts at the start of their policy, were able to respond to alerts and change their habits within 30 days to achieve scores that will ultimately save them money on their renewals.”

Eleanor Navrady, 18, said the daily updates gave her a constant reminder of how much money she could save.

“Because I can see how I’ve driven on each journey, and see how my driving directly affects my premium, it’s very easy to save money, which is great for students and young people like me,” she added.

Denva Bucke, another early adopter of FluxScore, said the policy had dramatically improved her driving.

“For me, one of the biggest benefits  is how the app scores your driving and shows you what mistakes are affecting your premium,” she explained.

“By following the alerts it gives me, I’m going to save a lot on my renewal and it also made me a safer driver.”

On average, policyholders are logging in to their app twice a day, showing how tech-savvy younger drivers are tuned in to monitoring their behaviour via their mobiles, whether it’s driving, fitness, bank balance or social arrangements.

Mr Bucke said: “Adding a game aspect where drivers are competing against themselves on a daily basis to reduce their premiums will not only help youngsters to save money, but it will also reduce accidents.

“We’ve also been told that the black box, which unlike many is mounted on the dashboard, is providing youngsters egged on by their mates to drive faster with a highly visible reminder to passengers that their driving is being monitored.”

Uniquely, the GPS telematics black box can act as an emergency phone in an accident, allowing claims handlers to automatically call the handset when an accident is detected.

If the phone is unanswered following a collision claims handlers can alert emergency services to the location – potentially helping to save lives.

Journey maps and the smartphone app, available on Apple and Android, are accessible by each driver named on the policy, allowing parents the chance to assess the driving of their teenage children.