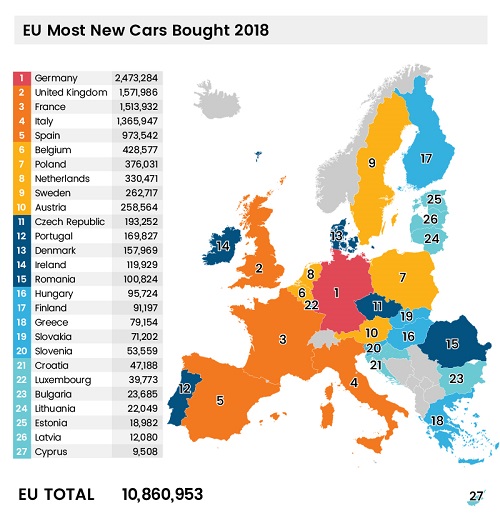 According to the Society of Motor Manufacturers and Traders (SMMT) 2,540,617 new cars were sold in 2017, which is an overall annual decrease of 5.7% in comparison to 2016. Despite this the UK’s new car market was still the third largest in a decade at over 2.5 million vehicles sold.

The RAC Foundation recently reported that were 38.2 million licensed vehicles in the UK, at the end of June 2018.  Of which 31.5 million were cars, showing an increase of 1 per cent compared to this time last year.

As a result, Click4reg decided to investigate further, how the UK ranks in comparison to the rest of Europe for the number of brand-new car sales conducted in 2018 so far.

The data was extracted from the European Automotive Manufacturers Association (ACEA) and it represents the figures for the number of brand-new cars that were purchased between January and August of this year.

The number of brand-new car sales made:

Click4reg found that the following countries were ranked the top 5 in Europe for the most new car sales:

Despite the UK having the second largest number of new car sales, it has experienced a 4.2% decrease in sales in comparison to January to August back in 2017.

The countries which remain firmly in the middle with neither the highest or lowest number of new car sales include:

At the other end, Click4reg can reveal the countries with the lowest number of new car sales between January to August 2018 are:

Click4reg also analysed the percentage change each European country has displayed since this time last year (January – August 2017). The counties with the highest increase in the number of new cars sold include: