The man who trains today’s F1 stars – In a Vauxhall 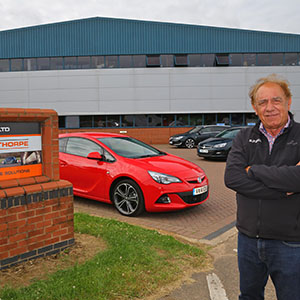 Rob Wilson is possibly one of the most important players in Formula One racing that you’ve never heard of. Based at Bruntingthorpe Proving Ground in South Leicestershire, Rob is instrumental in carving split seconds from the lap times of at least 12 drivers on the current grid, and his key training weapon is… a standard Vauxhall Astra.

‘The Vauxhalls will do everything that an F1 car does dynamically, just at a far lower speed,’ said Rob. ‘This allows me to explain the physics behind what the car is doing out on the track in real time, which I’d never manage in a performance car. The other advantage is that the driver’s engineer can ride along too, and this is crucial since a change in driving technique could result in a different set-up for the race car.’

Rob’s techniques, which have been honed from his own long and successful career in motorsport, assume a very high base-line in driving ability at the start of his sessions. The focus is on cornering and braking weights, and how to minimise both by adopting sometimes counter-intuitive cornering lines; even gear-changing comes under the microscope: ‘Many top drivers have never heel-and-toed during down-changes, because they’ve never needed to. But the discipline makes them appreciate the importance of smoothness and how it can have a positive effect on the balance of the car into corners,’ said Rob.

So of all the production cars Rob could have chosen over the past 15 years that he’s been running his sessions, why has he opted for Vauxhalls? ‘Stability, handling predictability and durability – these seem to come as standard in every Vauxhall I’ve used,’ said Rob. ‘The cars have an unbelievably hard time out on our track, as drivers try to beat my lap time, so I need to know that they’re not going to break, or do something unexpected when we’re cornering at over 100mph.’

And Rob’s road wheels for his 200-mile daily commute between his home in London and Bruntingthorpe? ‘A Vauxhall Insignia Sports Tourer – after spending a day being looked after on the limit in Vauxhalls there’s really no other option!’