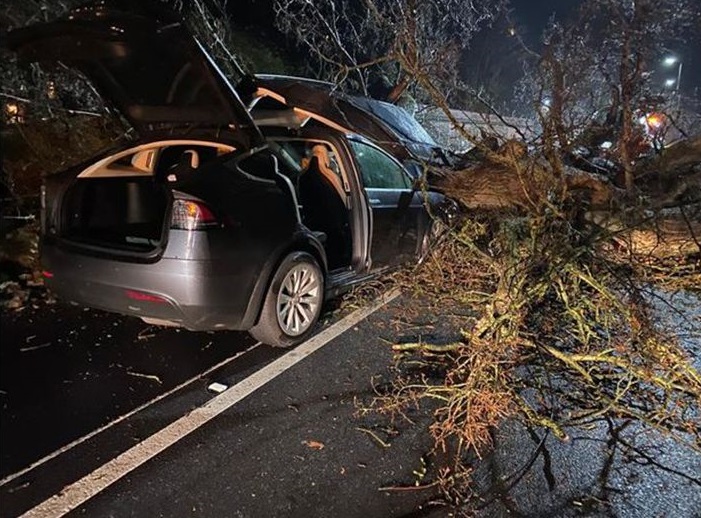 Laurence Sanderson, his wife and three children, were driving through Dorset when an oak tree came crashing down onto their bonnet rather than their roof, thanks to the smart safety feature.

In a twist of fate, another Tesla – carrying a family of three and driving in the opposite direction – also narrowly avoided being flattened by the 400-year old oak tree.

The Tesla Model X intelligent braking system came to the rescue once more before both families escaped relatively unscathed.

A couple welcomed the shaken up passengers into their nearby home, where they were offered food and water.

Mr Sanderson said: “My wife’s a bit battered and bruised but apart from that we’re completely unscathed – it’s a miracle.

“We were driving along the A31 and I saw the tree coming down in the blink of an eye. The car slammed the brakes on and the trunk landed on our bonnet.

“Literally another second and we would’ve been toast. It was huge – the biggest tree I’ve ever seen.”

Josh Whitelock, driver of the second electric vehicle said: “’I was expecting to turn around and see my girlfriend and her mother impaled by branches but incredibly that wasn’t the case. They were both OK apart from a bit of whiplash. It was a miracle we all survived.

”We were just in pure shock. Tesla has saved eight lives.

”It just goes to show that life can be over in a split second but thanks to Tesla making amazing cars that wasn’t the case this time.”

Mr Sanderson said: “I’d like to thank the lovely couple who took us all into their house, fed and watered us and played cards with the kids.

“They showed unbelievable kindness as did Gary, the landowner of the site where the tree stood – who was absolutely mortified – and has lent us his car.

“Both cars are totally written off but the main thing is we’re all safe. Elon Musk has done us proud.”

The automatic braking system comes as standard in all new Teslas.

However, even if you haven’t bought into Mr. Musk’s motors you’ll be happy to know that automatic braking systems are a common feature in many modern vehicles.

Kitty McConnell, passenger and partner of Josh Whitelock later tweeted: “Hey @elonmusk Your car saved my life.. and by boyfriends.. and my mothers.. [sic] and a family of five.”

If you’re worried about travelling in stormy conditions, the RAC offers advice on driving in heavy rain and coping with flooded roads.